Sportier Ford EcoSport S is Ready To Launch In May 2018

Ford has confirmed the launch of Sportier Ford EcoSport S which is scheduled in May 2018. The new sporty compact SUV has some similarity with US-spec EcoSport SES, although not that rich in features.

The Ford Ecosport S is powered by a 1.0-litre turbocharged EcoBoost petrol engine and other options of 1.5-litre petrol and diesel engines will be available with regular models.

The pre-facelift Ford EcoSport 1.0-litre EcoBoost was available in relation to a 5-speed manual transmission named as iB5, now it is available with 1.5-litre petrol and diesel engines. The new EcoSport S 1.0-litre engine comes mated to a new 6-speed manual transmission on offer. The upcoming EcoSport S has also got the updated suspension setup similar to the US-spec model in order to experience the sportier feel. 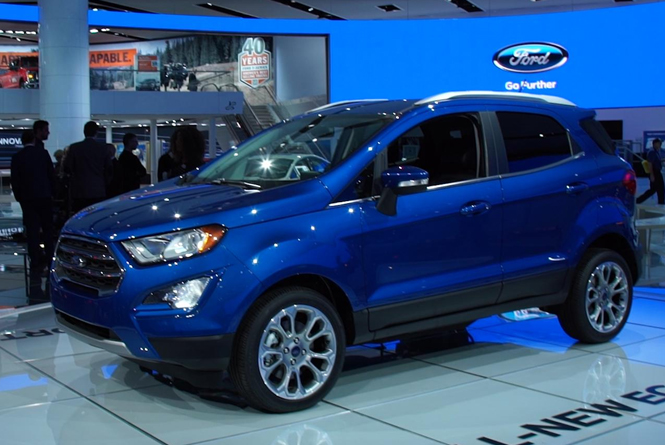 Considering the existing Titanium+ variant, the sportier EcoSport S will be available with sporty exterior look along with the new addition of a grille, new gunmetal finished alloys and outside rearview mirrors. It is expected to obtain Bi-xenon projector headlamps alike the Brazil-spec EcoSport Storm edition.

Coming to a cabin, it gets new fabric and upholstery, color-coded accents, and amazingly a sunroof. Further, it will also get a revised instrument cluster, chrome rings, and a large color driver info screen. Obviously, it is all better than the currently available EcoSport.

It is expected to price over the range-topping Titanium+ variant. The regular EcoSport Titanium+ petrol manual is available with Rs 10.52 lakh and the automatic version is priced at Rs. 11.35 lakh. While The diesel Titanium+ is available with Rs. 11.04 lakh in India. Considering the expensive EcoBoost petrol engine and extra features, the EcoSport S is likely to be available with a price tag of Rs. 11.5 lakh. The new Ecosport S will rival the Tata Nexon, Maruti Vitara Brezza, Hyundai Creta and Captur in the market.