Suzuki has launched the 2019 model year version of the V-Strom 650 XT in India. The company asks for INR 7.46 lakhs for this ultimate adventure tourer motorcycle. Other than this cosmetic updates, the motorcycle did not witness any sorts of mechanical upgrade. It gets updated body graphics while the colour options like Champion Yellow No.2 and Pearl white Glacier are continued to be same as of the outgoing version. The former colour option remains unchanged at graphics and rim colour as well. However, the similar colour graphics’ layout is more exciting and appealing. With the white colour scheme, the graphics layout is all new in blue colour instead of the earlier black colour. The rims are now colour in blue in this variant. Overall, the new body graphics blends well with the adventurer’s body language.

Commenting on the launch of new edition, Mr. Satoshi Uchida, Managing Director, Suzuki Motorcycle India Pvt. Ltd. said, “We have received an overwhelming response since the launch of Suzuki V-Strom 650XT last year, we wish to continue the momentum and win the hearts of our customer in 2019 as well. We are delighted to introduce the 2019 edition of Suzuki V-Strom 650XT which comes in added with features and will add to the attractiveness of this very capable motorcycle. 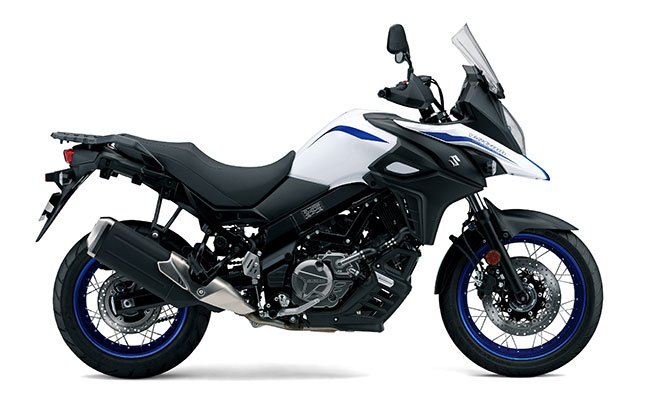 Powering for this all-terrain Suzuki motorcycle will come from the identical mill performing duty on the outgoing model, a 645cc, liquid-cooled, V-Twin engine. It is claimed to develop the maximum power of 71PS and transmit 62Nm of peak torque to the rear wheel. The power transmission is handled by a 6-speed gearbox. Among gizmos, the motorcycle gets features such as three-level switchable traction control and ABS as standard fitment.

In the adventure touring segment, the V-Strom 650 XT ABS seeks competition with the rivals like the Kawasaki Versys 650 (INR 6.69 lakh) and the SWM SuperDual T (recently the price gets updated temporary at INR 6.5 lakh). In competition, the Kawasaki is more road-focused one while the SWM meant for off-road riding. The Suzuki V-Strom 650 XT ABS is a perfect blend for on and off-roading both. Also, it is the first adv tourer from Suzuki being assembled in India.