Utility vehicles have been the great sales influencers in the passenger vehicle industry for quite some time. However, the circumstances like the rising fuel prices, uncertainty in the longevity of diesel fuel and high acquisition costs, affected the sales of the utility vehicles negatively.

Selling a UV over, its hatchback and sedan sibling translates into a profitable deal for most of the companies. However, it seems that the manufacturers are going to deal with the bad phase in coming time. Drastic fall in the sell of UV segment from 20% growth by the end FY2018 to merely 2% this March indicates the same and the reason being considered behind this slump is people’ awareness towards fuel consumption from these heavy machines while petrol and diesel prices are rising in the country.

Over the last two months, when there were election and their campaigning phase in the country, the growth in demand for UVs were expected. Although, we witnessed its opposite and significant fall in the sales of big UVs like Toyota Innova and Mahindra Bolero. Whereas, the popular urban movers such as the Maruti Vitara Brezza, Hyundai Creta and the Maruti Ertiga managed to maintain their sales even in the slow pace market. Altogether, the total volume generated by the Top SUVs in the country stands at 41,290 units in April 2019 over the 41,479 units sold in April 2018. Have a look at the top performers of last month.

The Maruti Vitara Brezza celebrates top rank with 11,785 units dispatched that is 9 percent more over sold 10,818 units in April 2018. Also, the Maruti is pondering to bring petrol variant of the diesel-only Vitara Brezza any time soon as the carmaker has already decided to discontinue diesel cars entirely from April 2020 in lieu of complying with the new BS VI emission norms.

Positioned at the second spot, Hyundai Creta is fighting for the top position with 10,487 units sold last month. This popular feature-loaded UV garners an increase of 11 per cent in its sales as against to 9,390 units sold in April 2018. 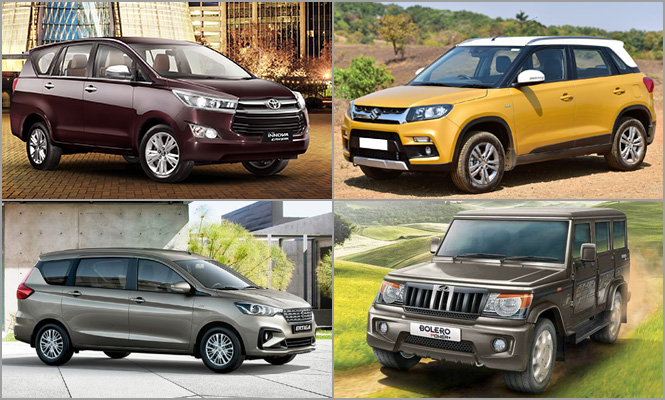 Maruti Ertiga that is a value-packed UV with the improvement of two positions in ranking, sits at the third position. Cumulatively, it has garnered sales of 8,087 units which is a whopping growth of 42 per cent over the 5,689 units sold in April 2018.

The Toyota Innova Crysta which is one of the most preferred UVs across the fleet observed a drastic fall of 20 per cent in its sales in April 2019. Surprisingly, the election campaigns did not work in its favour and the vehicle has to become satisfied with the sales of just 5,621 units last month as against to 7,055 units sold in the similar month last year.

Mahindra Bolero, the robust SUV in the market secured the No. 5 position with a drop of two positions from last year. It registered sales of 5,310 units resulting in a decline of 37 per cent over 8,527 units sale in April 2018. As compared to last year, the safety norms in the country have become more stringent due to which Mahindra is updating its most popular SUV the Bolero with safety features such as driver’s airbag, seat-belt reminder and parking sensors as well.

Doesn't matter if there is scarce demand of UVs in the market, the carmaker would continue to roll out UVs. The recent launch of Hyundai Venue firmly supports the statement while the MG Motor India is all set to launch the Hector SUV in June which will be followed by Kia Motor India’s SP2i Concept. Will the UV segment grow again in future? Only the time will tell.

Top of the Sedan and SUV Cars Launched in Last Month
Views: 2000

Top SUV Cars in India Which Have Got Large Popularity
Views: 5115