Lately, a teaser video has been released via the TVS Motors. The video is revealing the tail-lamp of the undisguised model along with its exhaust note. The twist of the throttle makes us believe that it is a performance oriented product. While, at the end, the teaser is reminding to block the date, 5 Feb 2018 which will be the day of its official debut in front of the audience. The images from the earlier spied events of the Graphite test mule, the tail lamp appears similar.

TVS Graphite that is being most anticipated scooter to launch on February 5 in Chennai, was firstly debuted as a concept at the 2014 Auto Expo. The features that concept was loaded with were the AMT gearbox with paddle shifter and dual-channel ABS. The full-fledged Graphite version is not likely to be packed with similar offerings owing to keep the price of the scooter in check. Well, slated to designated as a premium scooter, the attributes that could be seen on the Graphite may include LED DRLs, all-digital instrument console, engine kill switch, and 12-inch alloy wheels anchored with petal disc brake for the front wheel. 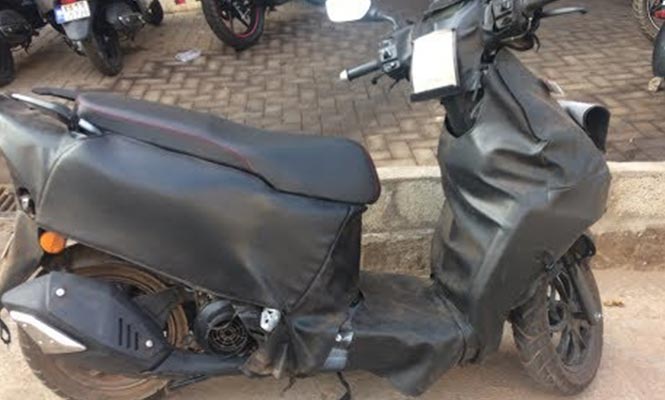 The engine specs are officially not unveiled by the TVS since now. We can expect the Graphite either with a 125cc or a 150cc motor. If it will be a 125cc performance scooter, it will use the power churn around 11.5bhp via a mated CVT transmission. The top speed for the scooter will be 100+ kmph.

In the segment, it will go against the competitors like the Suzuki Access 125, the Honda Grazia and the upcoming Aprilia SR125. However, the model launched with the 150cc motor the rivals will be the Aprilia SR 150 and the Piaggio Vespa 150. Post its official unveil on the said date, we can also witness it at the 2018 Auto Expo podium that is going to take place from February 9-14.

Upcoming TVS Scooter May Get the Ntorq 125 Moniker
Views: 1822