iBall has pulled its wrap off from Slide 3G series tablet. The tablet is built with keeping Indian customers in mind. It has received the name Slide 3G 7803Q-900 which is priced at Rs. 13,999. Earlier the company had brought Slide 3G 7271-HD70 tablet which falls under the budget price but specs and features make the predecessor to compete with new tablet. The main thing is to notice about these Slide series tablet is their battery that is enough to attract customers.

Both tablets are best for meeting with the purpose of voice calling. Slide 3G 7803Q-900 tablet gets 7.85-inch TFT display which gives a screen resolution of 1024x768 pixels while the Slide 3G 7271-HD70 is a 7 inch tablet which doesn't differentiate both devices. 1.3GHz quad-core ARM Cortex A7 processor has been received by the newly launched tablet while the previous one gets 1.3GHz dual core processor. 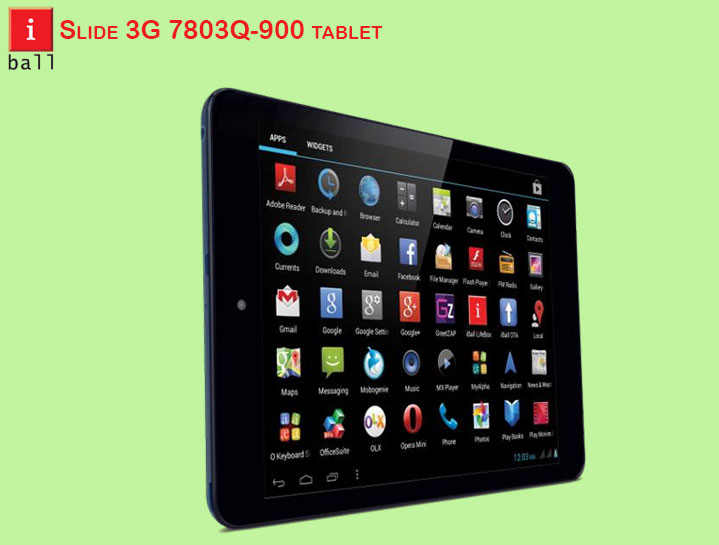 Manufacturer does a great work in imaging section of Slide 3G 7803Q-900 by crafting the rear end wonderfully with 5-megapixel autofocus camera that is enough to capture quality images with LED flash. LED flash enhances the picture quality by adding brightness in pictures. The front features 2-megapixel snapper, to solve the purpose of video calling. On the other side, Slide 3G 7271-HD70 disappoints with 2MP rear camera and 0.3MP front facing camera.

Both devices are packed with 1GB RAM that has the capability to run lots of applications altogether. On the storage front, Slide 3G 7803Q-900 has 16GB of built-in storage while Slide 3G 7271-HD70 comes with less storage i.e. 8GB. Both support microSD card which can store upto 32GB of data. To interact with both devices, Android 4.2 Jelly Bean is here. The newly launched device is housed with larger 4000mAh battery that proofs itself as a power-bank. Both devices have Wi-Fi, Bluetooth, GPS/ A-GPS, GPRS/ EDGE and Micro-USB support along with 3G supports.