Alcatel is a known Chinese brand known for its smartphones and other electronic gadgets. One must have noticed that Alcatel recently unveiled Pixi 4 with Android M and 5-inch HD Display at INR 4,999. The company has now again brought forward a brand new smartphone under the Pixi series to strengthen the lineup. The new Android smartphone has been named as Pixi 4 Plus Power and is available in two colors namely Black and White, with extra interchangeable back panels with several color options like Blue, Green, Orange, White, and Black.

The major highlight of this new smartphone is its humongous 5000mAh battery and the ability to work as a power bank for other smartphones, factors that are hardly seen in other smartphones of the same kind. Unlike other specifications, the company has not yet divulged information on the pricing or on the fact as to when would the product be made available for customers both from a global perspective and India as a country. 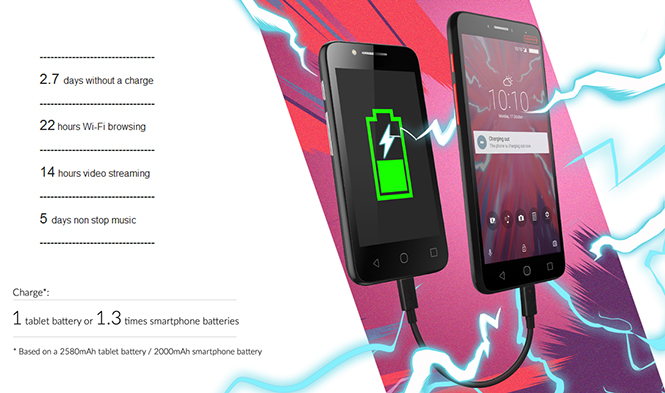 The new Dual-SIM smartphone supports Micro SIM cards and operates on Android Marshmallow v6.0 OS. It further comes with a 5.5-inch HD IPS display that gives it a resolution of 720x1280 pixels alongside featuring a 1GB RAM. The company has again not stated anything about the processor or the number of core that are present in the smartphone.

The GSM-handset comes with a rear camera of 8-megapixels and a 5-megapixel front camera both supported with a flash module. The camera app is additionally equipped with 16 preloaded filters and 13 colorful borders. The smartphone comes with 8GB of inbuilt storage that is expandable via microSD card up to 32GB. 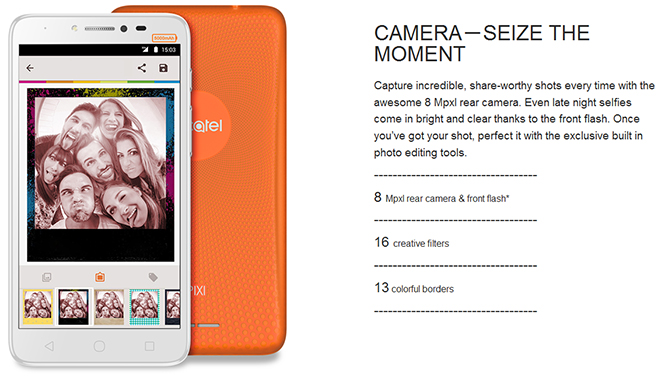 As stated above, Pixi 4 Plus Power bears a massive 5000mAh battery that as per company claims can deliver up to 2.7 days at a stretch with a single charge. The smartphone can also deliver 22 hours of Wi-Fi browsing, 14 hours of video streaming, and 5 days of continuous music playback.

This new Alcatel smartphone not only consists of an amazing battery but can also work as a power bank for any other Android smartphone using a Micro-USB cable. The company also claims that the full-charge battery of the smartphone can charge a tablet with nearly 2850mAh battery capacity and a smartphone 1.3 times with a battery capacity of 2000mAh.

As far as connectivity options are concerned, the smartphone specs don't disappoint on that as well. The smartphone include 3G, GPRS/EDGE, Wi-Fi (802.11 b/g/n), Wi-Fi Direct, Bluetooth v4.0, GPS, and Micro-USB 2.0. To give a better audio experience, Alcatel has equipped the Pixi 4 Plus Power smartphone with Arkamys optimized speakers. Dimension wise, the handset measures 152x78.3x9.9mm and carries a weight of 202 grams. Take a short sneak peek at the video given below: