OnePlus Two Spotted on an E-Commerce Website with Price

Recently India has received the OnePlus One handset to taste, and the buzzes for its successor are spreading on Web with several leaks and rumours. Currently, an e-commerce website has listed the OnePlus Two smartphone with price tag. The phone can be seen with a price of $551.99. Few specifications of the same can also be seen on the website to give a broader view of the upcoming device.

Image of two smartphones and a tablet are also listed on Coolicool. According to the website listing, a 5.5-inch display will be paired on the device. OnePlus Two will take the power from Qualcomm Snapdragon 805 processor to enhance the performance speed. On the storage front, a 32GB built-in storage will be enough to store any kind of soft data. It is expected to come equipped with a stunning 16-megapixel rear camera and an amazing 5-megapixel front-facing camera. So, this would be proved as a best device to buy for all shutterbugs. It is backed by a 3300mAh battery. The handset is also listed with few connectivity features include 4G, GPS, Bluetooth, Wi-Fi, Micro-USB and OTG. 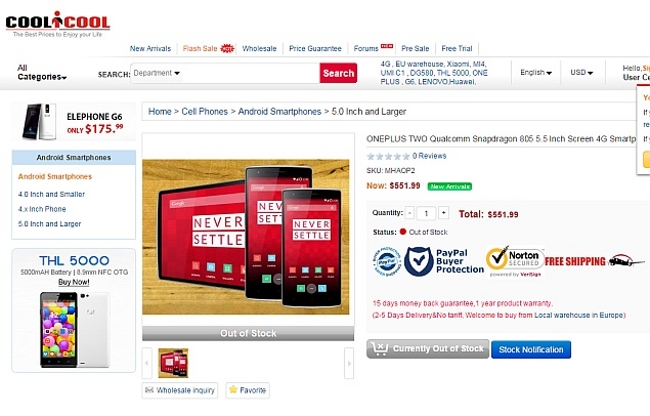 It is also said that the successor of OnePlus One would be smaller than the One. OnePlus' Co-Founder and Director, Carl Pei said, "Next year, we're looking into experimenting with different types of form factors and different types of products. And of course, everyone knows OnePlus Two is our next flagship coming up next year, we're going to announce it in Q2 or Q3, a one year cycle basically."

However, Company has not provided a single detail regarding the this handset. Two day back, the Company had brought 64GB model of OnePlus One in India at the price of Rs. 21,999. See all the specifications of this handset with us. The smartphone is available on Amazon India via invite only system.

OnePlus is Organizing an Event on April 20, OnePlus Two May Announce
Views: 1024

OnePlus Two will Un-curtain on April 17, Listed to Presale
Views: 1612