The Android 5.0.2 Lollipop based Smartphone of Alcatel OneTouch Spotted

After launching a plenty of new devices of Pop lineup during CES 2015, Alcatel OneTouch is now prepping to bring yet another feature-rich handset to heat up this competitive smartphone segment. Notably, GFXBench has posted a catalog on its official website, which is clearly hinting about the arrival of whole a new handset appended with a Model No. 6045.

As per GFXBenchmark, unofficial gadget of this TCL-owned company will be powered by a 64-bit Snapdragon 610 chipset paired with a 1.5GHz quad-core Cortex-A53 CPU. Here, listing shows a 13.7-inch display, which is likely to be a mistake. And, its screen has been claimed to offer a pixel resolution of 1920 x 1080p.

The new scion of firm will be integrated with a Qualcomm Adreno 405 GPU for graphics processing as well as a single SIM card slot has been mentioned. The comprisal of a 12-megapixel main sensor equipped with autofocus, LED flash and face detection functionality is also an alluring part of device. 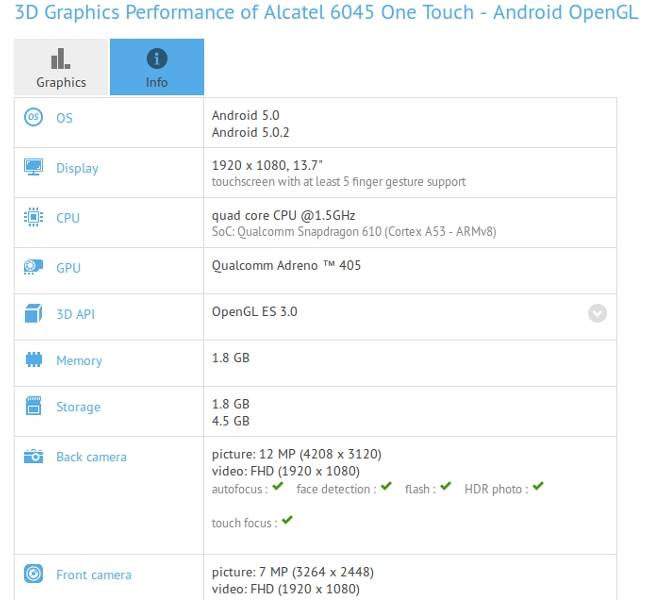 Additionally, phone will incorporate a selfie shooter of 7-megapixel. On connectivity front, reports are suggesting that handheld will be outfitted with GPS, NFC, Bluetooth and Wi-Fi options. Interestingly, forthcoming mobile phone will run on Google's Android 5.0.2 Lollipop operating system to be the first choice of tech-savvy youths.

According to GSMArena, Alcatel OneTouch 6045 will be housed with 2GB RAM and 8GB of inbuilt memory along with a microSD card support. Moreover, it will assimilate accelerometer, compass, gyroscope, light and proximity sensors. Well, corporation is yet to confirm the above mentioned specifications of its next-iteration, so we will have to wait to get a detailed information about handset.

Can Android Lollipop be so Popular?
Views: 1425