The Snapdragon 810-Powered, Xiaomi Mi Note Plus Popped Up on GeekBench

Apparently, the Chinese Company: Xiaomi has received a lot of applauses by recently-launched remarkable phablets: Mi Note and Mi Note Pro. And now, this fastest-growing firm is intended to again show its dominance in mobile industry by disseminating Mi Note-series of plus-sized handsets. First spotted by GizmoChina, GeekBench has posted a brochure on its official website that includes some of the specifications of a yet-to-be announced gadget, called Mi Note Plus as well as confirmed the name of brand's upcoming scion.

Talking about the cataloged specifications and aspects of Mi Note Plus, it will be engineered with an octa-core Snapdragon 810 processor paired with 4GB RAM just like its feature-rich predecessor: Mi Note Pro. As per listing, its processor has been claimed to be clocked at 1.55 GHz operating system.

The sources are suggesting about the inclusion of Android 5.0.2 Lollipop OS, which is the latest and more optimized mobile operating system of Google. On camera front, smartphone will be outfitted with a 13-megapixel rear camera, but details about its front snapper are yet-unknown. 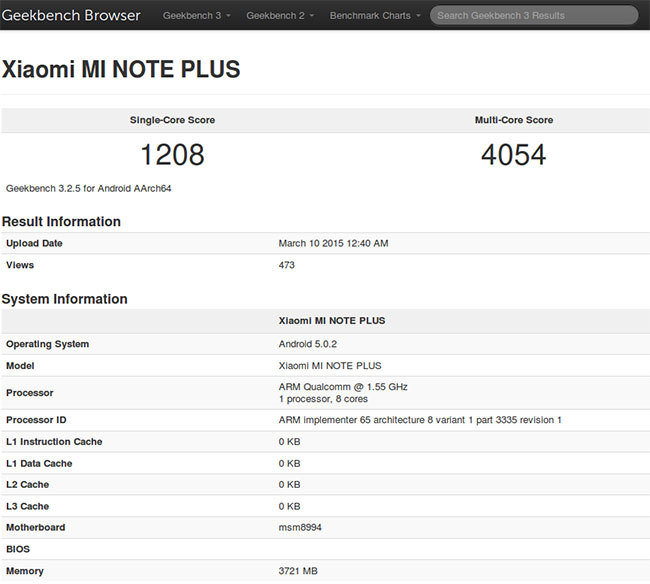 However, screen-size of this unofficial phone has not been mentioned in listing, but its display has been claimed to produce a pixel resolution of 1440 x 2560p. Rest of the specs include, Adreno (TM) 430 GPU that will handle the graphics processing of Mi Note Plus.

The GizmoChina says, "co-founder and president of Xiaomi: Lin Bin had stated a while ago that company is going to announce a special edition of the Mi Note." so we could expect the arrival of forthcoming member of Mi Note family, which might feature more elegant and stylish design than Mi Note.

Things You Should Know About Xiaomi Redmi Note 9
Views: 12516