KTM is about to unveil new 2017 variants of its RC200 and RC390, but the brochures of the two beasts are already out in the market before its launch. According to a brochure unveiled by Motoroids, both the bikes this time will feature a new paint scheme along with a new canister exhaust. 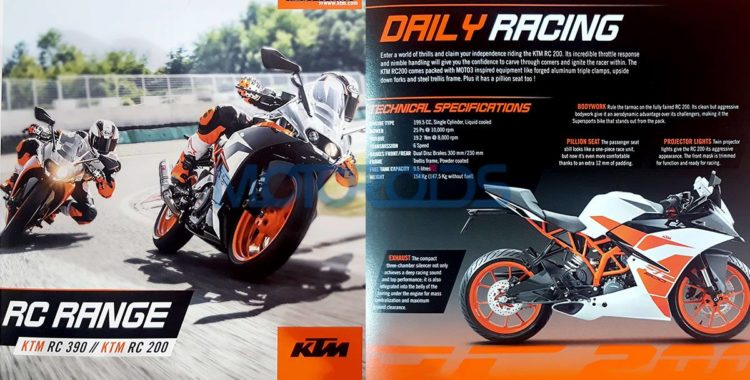 Talking about the engine, the new 2017 KTM RC390 is blessed with the same 373.3cc single cylinder liquid cooled, fuel injected motor, which is capable of churning out maximum power output of 43.5 PS at 9,000 rpm and 36 NM of peak torque at 7,000 rpm with the help of a 6-speed transmission unit.

Furthermore, it packs a new exhaust system along with a stainless steel underfloor pre-silencer and a rear aluminium absorption silencer having a catalytic converter in it. The company also kept an eye on the safety measures and as a result the monster now comes with a bigger 320mm front disc and ABS as standard. 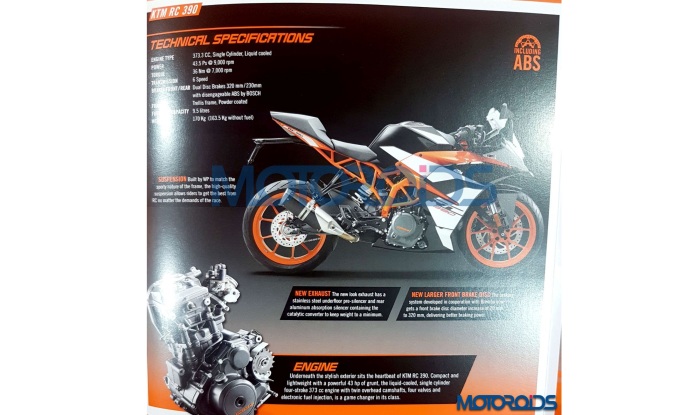 Next in the list is KTM RC200, which features a 199.5cc motor, capable of churning out 25 PS of maximum power at 10,000 rpm and 19.2 NM of peak torque at 8,000 rpm. Along with a new white and orange paint scheme, it also packs an underbelly exhaust unit and 12mm of extra padding on the pillion seat. ABS in the bike remains absent even as an option.