Lodha Foundation has started the bike ambulance services in Mumbai on Sunday. Will be equipped with a first-aid kit and oxygen cylinder, the facility will serve the Mumbaians with a 24X7 medical services, in the city with heavy traffic situations. launched by a Mumbai-based charitable trust, the facility will provide swift movement for the needy ones in case of emergency during rush hours.

Lodha Foundation is backed by a local lawmaker. He is the person behind the idea of bike ambulance service. Which says, the bike ambulance will carry patients to hospital free of cost by covering the long distance in short interval of time during the golden hour. Also, in a situation of getting stuck in traffic, it is comparatively a distinct approach, as four-wheeler ambulances confront mentioned above problems. 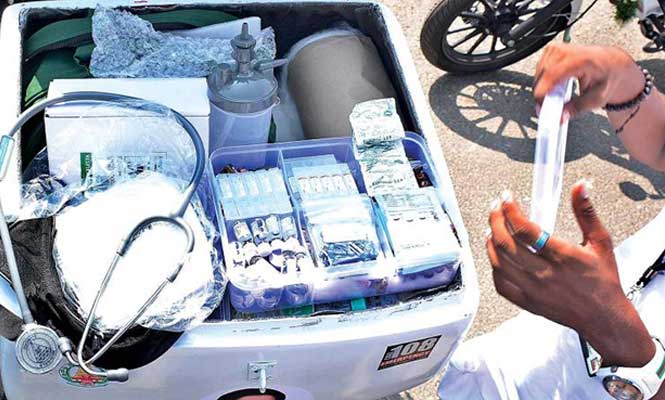 Mangal Prabhat Lodha, a politician and founder of the charitable trust claims that the ambulance can easily pass through the narrow lanes along with all the facilities provided in ambulance. The ambulance has a proper arrangement of medical kit, stretcher and oxygen cylinder, along with the sitting space for doctors at the back.

For your memory, this bike ambulance concept is not observed for the first time in the country. It had already been launched in Chhattisgarh in July 2017. The services managed to save hundreds of life there in remote areas. The cities like Bengaluru and Hyderabad has also been benefited with the services in saving the life of patients mostly the accident victims.