As confirmed by the Italian motorcycle manufacturer, Moto Guzzi its adventure-touring motorcycle concept that was showcased at the 2017 EICMA in November, will hit the production line by the end of this year. Whereas, it will be available on sale in January 2019.

Design cues and a white, yellow and red paint scheme on the V85 are borrowed from the brand’s Baja motorcycles, was on sale in 1980s. Furthermore, the equipments such as spoke wheels, high mudguard, an upswept exhaust, a trail rack and fork protectors, ensures its top self adventure touring quality. At the fascia, the motorcycle is studded with twin headlamps incorporated with an LED strip shaped manufacturer’s logo.

Powering for the Moto Guzzi V85 will come from an all-new 850cc V-twin engine being considered as a base powertrain for the future offerings from Moto Guzzi. The power output from the said powertrain is an enhanced 80bhp as compared to the V9 Bobber and V9 Roamer. Both the models get the propelling power of 55bhp from the mated 853cc V-twin engine. 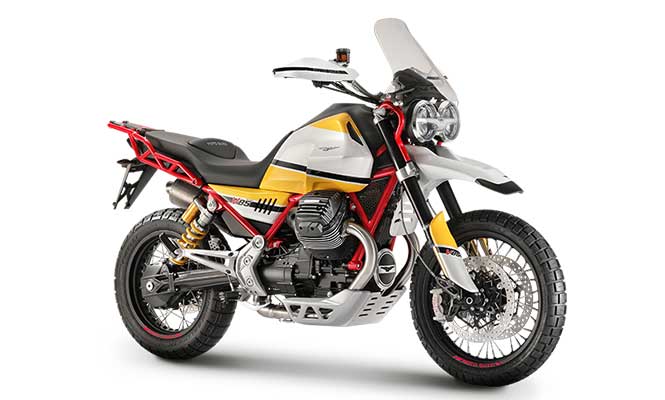 Suspension duties on the bike will be take care by the inverted front forks and rear monoshock being sourced by Ohlins suspension. Altogether, the asymmetric swingarm is the an all new bit that holds a new shaft drive transmission.

Apparently the concept seems ready to launch, ultimately the production ready model will be displayed at the upcoming 2018 EICMA. The launch for the same had been announced in January 2019. Its emergence in the Indian market is still in darkness, expectations suggest it can take place sometime in next year.

Moto Guzzi All Set to Introduce V9 Bobber And Roamer Next Week
Views: 1887