Olympus Air Clip-on Camera; Something Great and Smart than Anything

The Sony QX series camera was the only products that were blessed with the feature of clipping over the Smartphone. The technology is now boosted for a better product with the aspect of having a DSLR implication for the Smartphone devices. The Olympus Air A01 is the latest in the talks to boast a highly capable apparatus in the imaging world which can produce great pictures while displaying everything on the screen of your smartphone. Everything here sounds exactly like the Sony QX series lenses-cum-cameras, but the major thing which only Olympus is going to deliver is the practicality of switching between lenses; The DSLR effect.

The product here from Olympus is a micro four third lens mount equipped unit with the enormousness of 81 points auto-focus system and 1/16000s shutter speed controlled by an electronic shutter. The 16 megapixel sensor clicks the images with its dedicated app interface for all kind of platforms. This camera was firstly introduced at the Photokina event 2014, where the company hinted about such a product for future. The connectivity options available in the camera to communicate with the smartphone are Bluetooth and WIFI. It also boasts a jack for tripod mount. 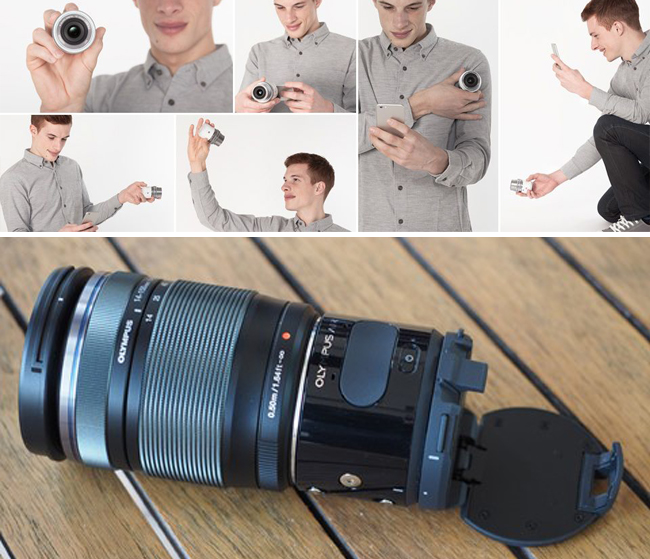 The Japanese people will be the first to own this gadget and the rest of the world may see it in the future. The price of the camera is ¥33,800 for body only and the bundled kit lens 14-42mm f/3.5-5.6 will be made available for ¥49,800. The DSLR quality images are expected from this gadget as the company claims it to be.