The next generation sedan of Renault Megane has been caught on camera while testing on European tracks. From the spied images only the exteriors of the upcoming can be seen. The 2017 sedan version of Renault Megane features new front fascia, tail lamps and the side profile up to the C-pillar. The roofline appears lowered, making it a little bit longer compared to its hatchback variant.

Renault had launched the fourth generation Megane hatchback at the starting of this year with the estate model being later unveiled in march. Now the sedan variant of Megane can make its global debut sometime next year.

You can also check this out: Next Generation Renault Megane to Debut at Frankfurt Auto Show 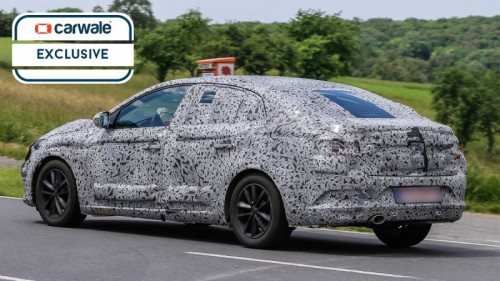 This new upcoming sedan shows the third body style of Megane. Though there are no official details revealed by the company, it is expected to inspire by the hatchback and the estate car engine lineup. It includes a range of petrol and diesel motors as well as diesel hybrid similar to HY-KERS unit used by their F1 team.

Some sources suggest that this 2017 Megane will replace the Fluence sedan from the company’s lineup. There is also some rumors that the Megane sedan will also make its way to the country, but not anytime soon.