2017 Hyundai i30 Spotted Again Ahead of Global Launch

The much-anticipated third-generation Hyundai i30 hatchback has been spied again while performing the test rounds with a trailer hooked to the car from the rear panel. The new spy shots were revealed by Autocar and it seems like the car is all set for a global launch in next year by a revamped powertrain. Before that, it is expected to debut at the 2016 Paris Motor Show.

From the snapshots, it has been perceived that this latest prototype was towing a trailer as its development part. The hatchback has undergone performance tests at the Arctic and Swiss Alps as well during the winters. 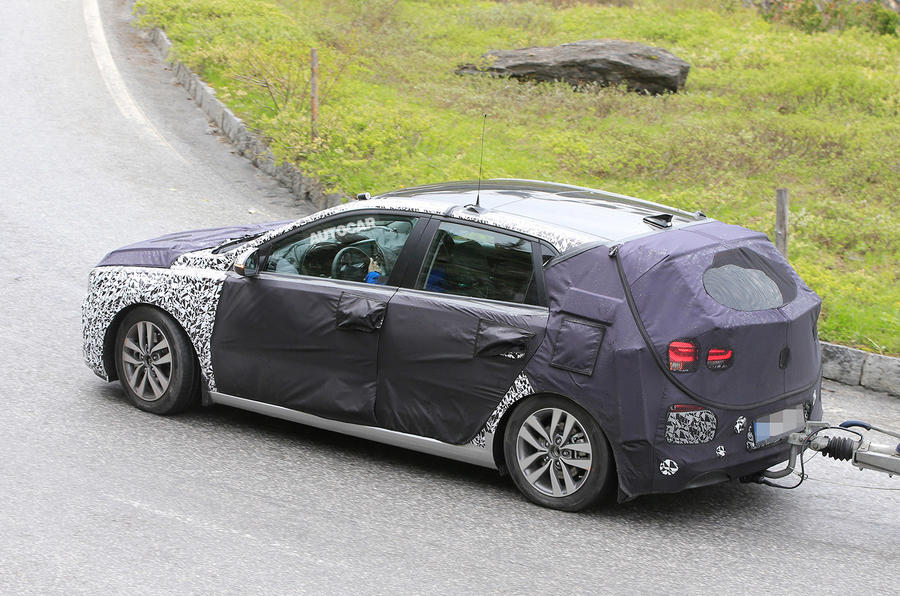 The designing cues of the 2017 Hyundai i30 are going to be inherited from the new Hyundai Elantra. It features the identical glossy headlamps, foglamps, hexagonal grille, and horizontal LED bits. The rear-end of the car would probably get a fresh set of LED taillamps, roof spoiler, and a new bumper outlook. Apart from this, there is a probability that the top-end grades of the i30 might feature a panoramic roof. However, the camouflaged images didn't reveal much about the prototype as most of the styling segments were covered, but, the revised grill is inspired by the updated i40 for sure.

You may also like: Skoda Released Sketches of its Upcoming Kodiaq

Coming over to the performance segment, the next-generation Hyundai i30 would be an exotic, performance-oriented first machine that is going to take the Hyundai's 'N' performance brand. Sources confirmed that the hatchback will load a 2.0L turbocharged engine with a couple of tech-specs from the Hyundai i20 WR3 race car. The claimed top speed of i30 N is around 250 km/h.

The engine is likely to be the same from the current lineup of i30 with a few notable improvements. The new variant will come up with seven petrol and diesel choices. It has a new 1.4-litre petrol engine and an 186 PS 1.6-litre T-GDI petrol motor. Though, the latter will be there only for the i30 Turbo. The 1.6-litre petrol and diesel engines will be transmitted via a 7-speed DCT.

Hyundai Santro Anniversary Edition All Set to Launch Soon Ahead of Diwali
Views: 6124