2019 Bajaj Dominar 400 which is listed with the Dominar UG name in the brand’s official presentation slides, has been leaked online ahead of its launch. The set of dealer presentation slides has revealed every single detail of the upcoming Dominar with updates for the model year 2019.

From the slides, it has been confirmed that there will be a Green colour scheme for the motorcycle. Draped in mentioned paint scheme the new Dominar 400 packs a set of new chrome lined alloy wheels and chrome finished USD front forks cover as well. Other than this, the bike gets the green colour highlights on the components such as extended tank shrouds, underbelly protection panel and side panel underneath the seat. The witnessed exhaust unit here is all new and blacked out which incorporates twin outlet for a single cylinder engine setup.

Other than these cosmetic changes, the motorcycle has also been altered heavily at the mechanical front. Well, being equipped with the identical 373.27cc, single cylinder engine of the ongoing model, the 2019 Bajaj Dominar UG will now use the improved churn of 39.9 HP at 8650 rpm and 35 Nm at 7000 rpm. The automaker managed to increase 4.9 HP of power over the earlier model by slashing around 2.5 kg in overall body weight. 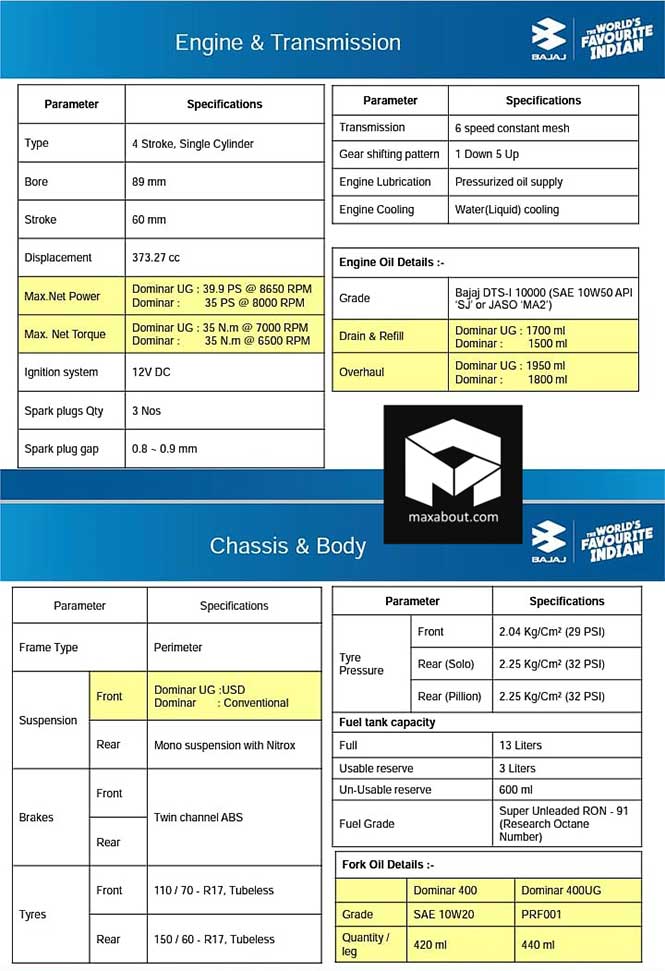 Moreover, the Instrument console is now a reworked unit which now displays information in dot matrix pattern like alarms and warning for the rider. It now offers the additional facilities such average speed calculator, dynamic and average fuel consumption calculator, fuel range warning along with alerts likewise oil pressure, battery health and much more.

Further, the motorcycle has also gone under the knife dimensionally as it now measures 836mm in width while the company claimed wet weight for the 2019 Dominar 400 now stands at 184.5kg. The fuel tank unit here is all same with a capacity of 13-litres whereas a new 13,000 rpm tachometer is included to the instrument console. As the company claims the engine oil to be used in a single drain will now be 1700ml instead of 1500ml in refill cycle for the earlier model.

Aesthetically, the 2019 Dominar 400 model is different from the standard model only in the aspects of forks, colour combination and an exhaust unit. While mechanically, with a host of electronic adjustments the engine now can attain the feat of 39.9 HP maximum power.