The flagship motorcycle from Bajaj Auto, the Dominar 400 which had been spotted testing earlier in red colour, has now seen in all different colour options. Hat tip to an automotive enthusiast who made it available on the internet in the white colour option. And, now a Green colour Bajaj Dominar under production line is doing rounds on the web.

We hope the Bajaj Auto move of introducing new colour options with a host of cosmetic updates and new features will work in its favour and turned into a huge success as this flagship model is seeing dwindling sales from a few months. In December 2018, the company registered only 24 units' sale. Among alterations, the motorcycle will witness an improved gearbox with no noise while gear shifting from neutral to first gear. The issue of vibration will be resolved to a higher level. 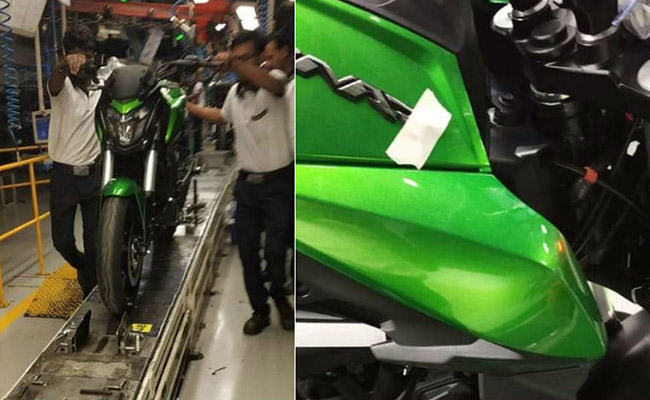 Other than the new colour option, the 2019 Bajaj Dominar 400 observed changes in the form of USD front forks for improved handling, sweptback twin-barrel exhaust with brushed aluminium finish, and stylish pentagon rear view mirror among others. In addition to this, the ground clearance has also been improved for better off-roading characteristics. The instrument cluster, on the other hand, will also be upgraded with a composition of readouts like speed, RPM and fuel efficiency. Meanwhile, the tank mounted digital display will give a clear view of gear position, trip-distance and odometer as well.

The new Dominar 400 gets all-LED headlights and a large radiator unit for better heat dissipation. The braking now incorporates dual channel ABS as standard fitment with disc units of measuring 320 mm and 220 mm at the front and rear wheel respectively. At the powertrain, however, the motorcycle will continue to be powered with the same 373.3 cc triple spark, 4-valve, DTS-i, liquid cooled, fuel injection engine of the current model. Albeit, we could see sorts of modifications like DOHC setup to replace SOHC unit and electronic adjustment for improved riding performance. Also, the enhancements will be made to comply powertrain with the upcoming BS-VI emission norms. Currently, the powertrain is said to return the maximum power of 35 PS at 8000 rpm and 35 Nm @ 6500 rpm. The engine comes mated to a six-speed gearbox with a slipper clutch for seamless gearshifts.

The unofficial bookings for the 2019 Dominar have commenced at several dealerships at the token amount of INR 10,000. The pricing and when will the official bookings start, is not revealed by the automaker yet. Though, we can expect a price tag of INR 1.8 lakh.

2019 Bajaj Dominar Out for Delivery in Black and Green Combo
Views: 2304