Bajaj Dominar 400, brand’s flagship in India was launched in December 2016. Feature packed Dominar was an impressive offering though in Bajaj’s perspective there’s something lacking or missing. In its 2019 Calendar year version, the Pune based bikemaker gave the hyper cruiser a thorough update at both visual and mechanical front. Not even this, The 2019 Bajaj Dominar 400 UG now features a host of new and sophisticated components. Also, the power output is also boosted with the inclusion of DOHC setup. Sooner, the updated Bajaj Dominar will hit the Indian two-wheeler market. However, its detailings have emerged ahead of its launch. Have a look at the churn of updates here motorcycle has obtained.

In terms of body language, new Dominar 400 is identical to the older version. However, its dimensions have been tweaked comparatively. It now measures 2156 mm in length, 836mm in width, 1112 mm in height with a ground clearance of 157mm. Its width has been increased from 813mm to 836mm by 23mm. Now considers updates which are apparent on this new 2019 Dominar 400. Lets start with the most noticeable factor, all new aurora green shade, with the addition of this new colour scheme, model’s palette for choices has been updated. Bajaj has eliminated white and red colour options while the black shade continues to be offered. The alloy wheels back to blacked out unit but with silver highlights instead of gold finished bits on the earlier model.

The headlamp assembly has been revised internally, however, continues to be an all-LED unit. The LED tail lamp, on the other hand, has been tweaked for a refreshing appeal but with similar design layout. The fuel tank is a similar unit with 13-litres fuel capacity though it gets a new D-logo and tank pad decal. 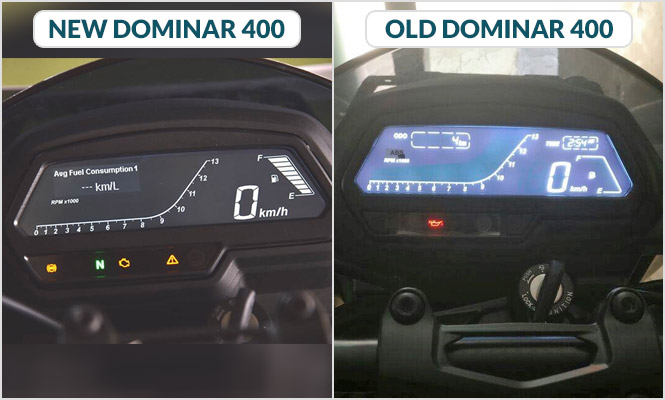 At the provided instrument cluster, the 2019 Dominar 400 will continue to retain the main LCD screen which displays information like speed, tachometer, odometer, engine kill switch, side stand indicator, dynamic fuel display and service due indicator as well. However, the second unit which comes studded on the fuel tank has also been changed to LCD unit. It readouts gear position indicator, clock as well as two trip meters.

Beneath the fuel, the new Dominar 400 continues with the similar 373.3 cc single-cylinder, liquid-cooled engine however with DOHC setup instead of SOHC configuration on the previous model. With the DOHC setup, the engine now churns out improved power of 39bhp, up by 4bhp from earlier 35bhp. However, the transmitted torque figure to the rear wheel is identical at 35Nm. Mated six-speed gearbox also experienced enhancement at gear ratios. 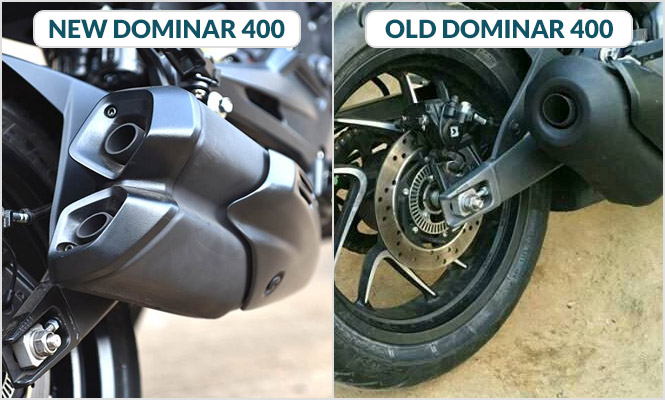 Firstly talks about the prominent cycle parts. The suspension setup now incorporates more sophisticated USD front forks from the KTM 390 Duke. While at the rear the monoshock unit is all similar to the older model. Braking setup too continues with the similar 320mm disc unit at the front and a 230mm bit at the rear. However this time they are armed with radical callipers instead of the regular callipers. The advanced safety of dual channel ABS has been made standard on the 2019 MY version and the non-ABS variant has been eliminated from the lineup.

Among others, it gets new side stand, double barrel exhaust, redesigned rear view mirrors which are wide and crafted from cast aluminium and a bungee under the pillion seat to grip luggage effectively.