2019 Tata H7X or the Harrier 7-seater is amongst the most awaited SUVs this year. The company has launched the Tata Harrier, however, the people are waiting for this seven-seater, more powerful diesel engine option with an automatic gearbox. It is slated to debut in front of the world at the Geneva Motor Show in March and launch in India later this year. However, the spy images of the Tata H7X performing test runs on Indian roads has surfaced online.

From the images, the H7X shares almost similar fascia as of the Harrier. However, the SUV diversifies at side profile and the roof rails that look notably taller than the Harrier. The running boards are also new bits at the skin of the H7X. Other than this, this H7X test mule seen with 18-inch, nine-spoke alloy wheels shared from the Land Rover Discovery Sport. There are chances that Tata could offer these bigger wheels on the production-ready model to give it an appealing appearance.

The SUV’s back seems boxy and more upright which will definitely convey more headroom for the third-row passengers. Further, with a larger windshield, the boot lid appears new with a more prominent rear spoiler. The test mule was heavily covered with the camouflage wrapping which indicates no updation in near future. However, we can observe a host of styling modification in lieu of distinguishing the H7X from the Harrier. 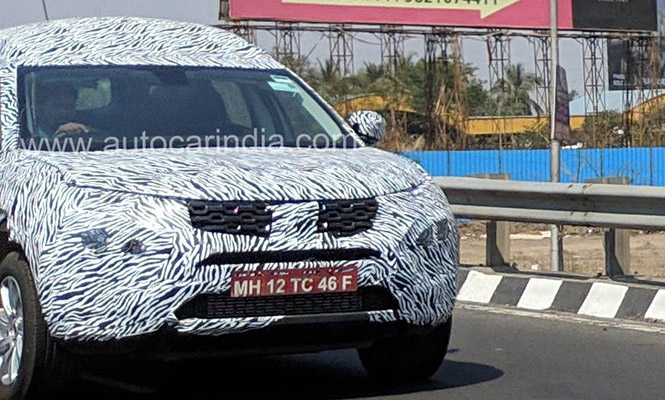 Just like the five-seater Harrier, the seven-seat Harrier option will also underpin the Land Rover’s DB platform for the addition of a new third row. The overall length of SUV with the same 2,741mm wheelbase will be increased by 62mm for 4,660mm length. In addition to this, a larger rear-quarter glass will replace the stylish ‘pinched’ window line.

Moving inside the cabin, the H7Z will continue to be the same as the five-seat Harrier, however, with the inclusion of a new third row. It would bring down the boot space from the 425-litre boot space of the five-seat version. The features which could be included with the third row for the rearmost passengers are cooled cup holders, USB charging points and additional AC vents as well. As expected the third-row seats can see a recline function as the new Maruti Suzuki Ertiga.

As per the earlier reports, the seven-seater Harrier version will be launched under the different moniker in order to differentiate it from the five-seater Harrier. Other than this, the option in question would be furnished with a more powerful, BS-VI compliant-2.0-litre Kryotec diesel engine. The engine is rated to churn out 170hp and 350Nm of peak torque. The transmission duties on the Harrier 7-seater will be managed by a 6-speed manual and a 6-speed torque converter automatic gearbox sourced from Hyundai.

The five-seat Harrier is available to retail at INR 12.69-16.25 lakh (ex-showroom, Delhi), we expect the seven-seater Harrier or H7X will cost around INR 1 lakh premium over the standard variant. Here in India, it is expected to launch later this year.

Tata Motors to Stop the Production of Nano
Views: 1573