The entry-level sportbike segment that has options such as Benelli 302R, KTM RC360 and Kawasaki Ninja 300 in the Indian market. The recent emergence of TVS Apache RR 310 and the updated Yamaha R3 has altered the complete scenario with the rise in competition. Now, it will really be interesting to see which one will rule the segment. Here is a brief comparison based on major aspects of the engine specs, features, underpinnings and the pricing. 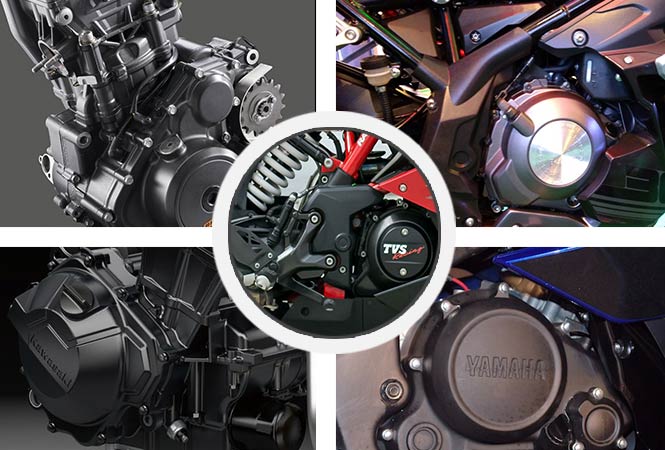 Let’s start with the newly launched TVS Apache RR 310. It gets the BMW G 310R’s 312cc single cylinder liquid-cooled engine that churns out the maximum power of 34PS and the peak power of 27.3Nm. The power transmission is handled by a 6-speed gearbox.

Recently updated Yamaha R3, on the other hand, comes packed with a BS-IV compliant 321cc liquid-cooled, parallel-twin engine. In integration with a 6-speed gearbox transmission, the engine is rated to generate the peak power of 42PS along with 29.6Nm of peak torque.

The updated 2017 KTM RC 390 comes packed with a 375cc single-cylinder, liquid-cooled BS-IV compliant engine. The equipped engine is rated to propel the respective peak power and torque of 43.5PS and 36Nm.

Last but not the least, the Kawasaki Ninja 300 draws maximum power and peak torque of 39PS and 27Nm respectively through the equipped a 296cc DOHC parallel-twin engine.

Followed by the Yamaha R3 and the Ninja 300, the KTM RC 390 is the winner in terms of generated power and torque. TVS Apache RR 310, on the other hand, uses a single cylinder still the churned out power is pretty close to the latter two. 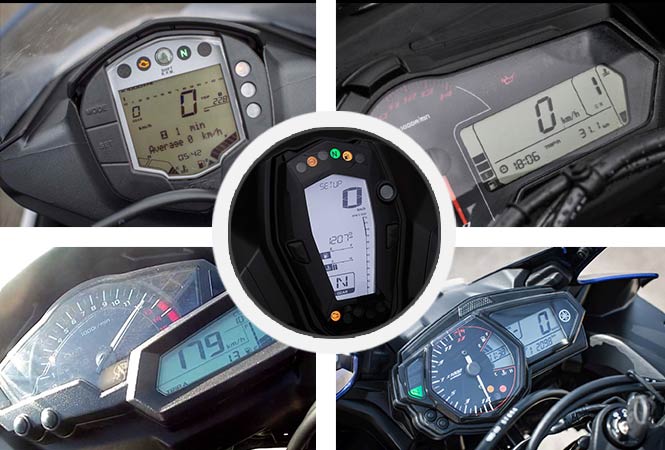 The Yamaha R3 that has undergone updation for the 2018 model year, continues with the same fitments of semi-digital instrument console and clip-on handlebars from the predecessor model. The headlamp setup consists of halogen unit as similar to the Ninja 300. In terms of top selves equipment, the company offers ABS as standard though the features like ride-by-wire throttle and slipper clutch miss out on this updated R3.

The KTM RC 390 comes equipped with headlamp assembly with LED DRLs and the LED tail lights carried forward from the older model. The LCD display unit on the instrument console is borrowed as it is from the previous-gen model. The motorcycle gets the rider’s aids of ride-by-wire throttle in 2017 as the first in segment feature. In addition to this, the company also offers the aids of the slipper clutch and ECVAP (Evaporative Emission Control System) to enhance the performance of the motorcycle. The ABS is being provided as standard fitment from a long while.

The Benelli 302R features a semi-digital instrument console, halogen headlamp unit with LED DRLs instead of an LED headlamp setup. Besides, the brand offers the facility of switchable ABS as standard fitment for the more secure ride. The ABS unit is sourced from Bosch.

The TVS Apache RR 310 supersport comes loaded with features like raised clip-on handlebars, first in TVS lineup LED Headlamps, and LED taillights. The provided handlebars on the motorbike offer a sporty yet comfortable riding position. For essential riding information, it keeps an all-digital instrument cluster that is positioned vertically on the console. The safety on the motorcycle is handled by dual-channel ABS as standard equipment.

Last, on the list, Kawasaki Ninja 300 misses out LED lights setup both at the front and rear end. The instrument console is semi-digital that consists of an analogue tachometer along with a a digital screen that displays the odometer, speedometer, fuel gauge and clock. Furthermore, the bike also receives an assist and slipper clutch but misses on the ABS. 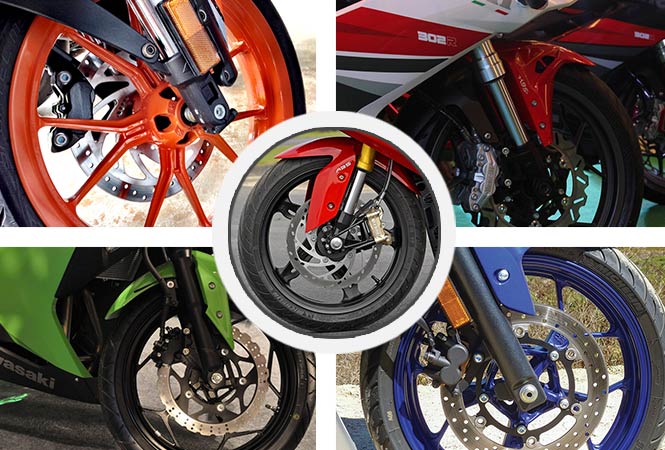 Weighing 173kg (Kerb), the updated Yamaha R3 is developed on a steel diamond frame that’s rigid. The bike mounts on conventional telescopic front forks and a rear monoshock setup. It is lighter than the Benelli 302R with 198kg and slightly heavier than the TVS Apache RR 310’s 169.5kg (kerb) and the KTM RC 390’s 170kg.

The 2018 Yamaha R3 now features new, lighter Metzeler Sportec M5 tyres (front- 110/70R-17 and rear- 140/70R-17) instead of MRF ones on the previous models. The braking setup comprises single discs on both the front and rear wheels of measuring 298mm and 220mm respectively. As mentioned earlier, ABS is on offer as standard. Placed at 780mm height, the saddle is comfortable for varied height and sizes riders.

Touches 198kg on weighing scale, the Benelli 302R is the heaviest one. It underpins steel trellis frame and suspends on 41mm inverted telescopic front forks and rear swing arm with the central shock absorber. The wheels wraps of Metzeler M5 Sportec tyres comparatively thinner than the optional TNT 300’s Pirelli tyres. For braking, the bike is equipped with dual 260mm front discs and 240mm rear disc. Its saddle sits at 785mm that is easy to ride on for riders.

The TVS Apache RR 310 is based on the trellis frame shared with the BMW G 310 R. Though it gets some refinements for sporty riding stance. The suspension setup comprises KYB inverted front forks and a rear monoshock unit with adjustment aids for preload. The bike is decelerated by a 300mm petal front disc and a 240mm rear petal disc. Whereas, the wheels get Michelin Pilot Sport tyres (front- 110/70 R17 and rear- 150/60 R17) for better grip. The saddle settles at 810mm, that is higher than its rivals.

The KTM RC 390 is brought up on the lightweight trellis frame that is mounted on WP upside down front forks and monoshock at the rear. The setup comprising a 320mm disc at the front and a 230mm disc at the rear sends out braking force to the wheels. Measuring 110/70 ZR17 and 150/60 ZR17, the Metzeler tyres at the respective front and rear wheels shod up the wheels. The bike has a kerb weight of 170kg.

Lastly, the Kawasaki Ninja 300 is built on a steel diamond type chassis and sits on 37mm telescopic front forks and a gas-charged rear monoshock unit with 5-step adjustable preload the braking force to both the wheels are distributed by a 290mm front disc and a 220mm rear disc (both are petal disc brakes). The IRC tyres of measuring 110/70 17 and 140/70 17 respectively front and rear wraps the 17-inch wheels. The bike’s saddle sits at 785mm.

In terms of pricing, sharing the similar amount of INR 3.48 lakh is the second least costly bikes as compared to the Kawasaki Ninja 300 that is priced at INR 3.60 lakh. Whereas, the motorcycles like the KTM RC 390 And the TVS Apache RR 310 with the price sticker of INR 2.29 lakh and INR 2.05 lakh will go easy on your pocket.