Aprilia RS660 Supersports Twin Concept has been showcased at recently passed 2018 EICMA show. Alongside, the range-topping RSV4 1100 Factory was also sharing the platform at the same event. The Aprilia RS660 is a new 600cc motorcycle that will sport in boosting the introduction of motorcycles in the middleweight sports bike segment which was earlier neglected by several manufacturers owing to register low sales in the category. Well, as of now, there is no sign, when it will hit the global market. Albeit, its arrival will pose a competition against the rivals like the Yamaha R6, Honda CBR650R and Kawasaki Ninja 650 in the segment.

Aesthetically, boasting sharp-aerodynamic styling, the Aprilia RS660 concept gets a split handlebar and a wide saddle which offers comfortable supersport riding stance. While the underpinned frame and swingarm units are aluminium moulded, rigid in nature. Not only conveys dynamic riding but also offers improved handling. In terms of styling, the aspect that pulls attention is the curved shape on the right side of the swingarm lefts enough room for exhaust fitment and less spacing between monoshock and swingarm. Considering overall styling, it will be a matter of attention at performance front. 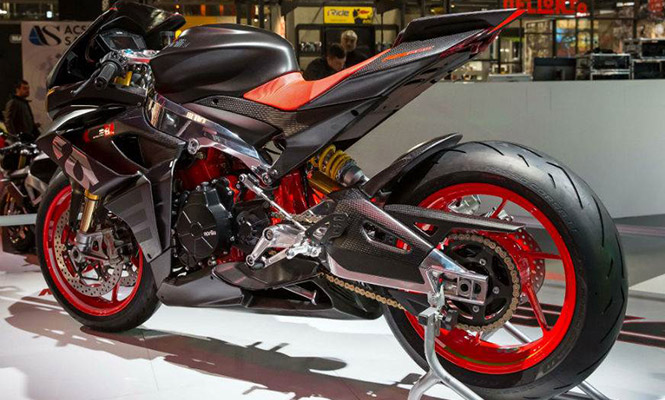 Draped in astonishing red and black colour scheme, the Aprilia RS660 concept is packed with a 660cc, parallel twin engine. Spawned of the 1100cc mill of the Tuono V4 and RSV4, the single is being said to develop around 100bhp of peak power along with 90Nm peak torque. As the Italian marque claims, the bolted engine will provide riding experience as similar to the bigger offering in the segment with a better control.

All in all, the Aprilia RS660 concept is a perfect blend of sportiness and performance that will attract the marquee’s main target - youth for day to day riding and track performance at the same time. Altogether, the positioning of significant components such as saddle, handlebar and footpeg also supports brand’s focus of daily commute.

As per the Italian bike maker, the RS660 will be a game changer in the strategic market segment not only in European but also in Asian and American markets. However, the time will say how well it turns out on the expectations of the automaker.
Altogether there are chances that the Indian market could also see its introduction when it will be in production-ready guise.

Vespa and Aprilia Scooters Get Updated with CBS or ABS- Check Out New Prices
Views: 1672