The Piaggio Group-owned company, Aprilia has eventually launched the facelift version of its sportier scooter offering, the Aprilia SR 150 at the starting price of INR 70,031. While, in order to grab hands-on models like the Race version and the Carbon edition, one has to shell out the amount of INR 80,211 and INR 73,500 respectively. The 2019 version of the SR150 and the SR150 Race seeks the premium of INR 2500 and INR 3500 over the earlier models.

Let me remind you, the SR 150 did not see any alteration at the mechanical and underpinning end. The similar 154.8cc single-cylinder, air-cooled, three-valve motor that performs duty on the outgoing model, will take care of the propelling duties. Mated to an automatic CVT transmission, the mill is capable of churning out the maximum power of 10.2PS at 6750rpm and 10.9Nm at 5000rpm. The engine is rated to return the top speed of 95kmph.

On the suspension front, the conventional telescopic front fork and a rear monoshock absorb dumps on the roads with potholes. While the de-acceleration on the scooter will be handled by the armed 220mm disc brake at the front wheel and a 140mm drum at the rear wheel. Check out the additions, which are new to the 2019 Aprilia SR 150

The next-gen Aprilia SR 150 appearance has not got refreshed with the addition of a host of colour schemes including matte blue, olive matte green and a Carbon Edition. Additionally, the new sticker job makes this sportier automatic scooter more appealing than the previous model. Further, a new colour scheme is also being offered for the Race edition. 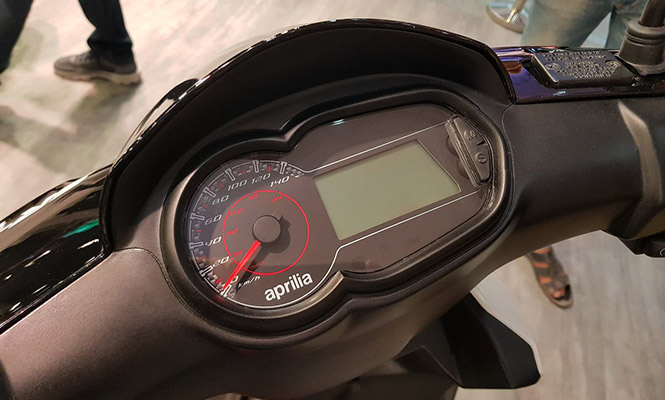 in terms of features, the analogue instrument console on the earlier model was criticized a lot by the enthusiasts, has been replaced via a semi-digital instrument cluster. The new instrument unit now comprises an analogue speedometer with the facility of displaying speed in both mph and kmph units. The new console now gets a black background instead of white on the earlier console. It gets the warning indicators for an oil change reminder and low-fuel.

Moreover, to keep your smartphone always awake, the Italian company added an under seat USB charging port. While, the facility of 'Aprilia Connect' app offers smartphone connectivity for navigation, distress button and vehicle tracking. The application is available for both the IOS and Android users.

Vespa and Aprilia Scooters Get Updated with CBS or ABS- Check Out New Prices
Views: 1926