As revealed from the Audi India official website, the new Audi A8L is all set to launch in India soon. At the Audi summit in Barcelona, the model gets a huge round of applause from the audience for being featured with the Level 3 autonomous technology. For the first time, the technology is incorporated in the vehicle is in mass production. But the major highlight of this package is its futuristic artificial intelligence that is expected not to be the part of India bound model owing to Indian government’s tough stand on AI in cars.

Built with the use of materials such as aluminum, steel, magnesium, and carbon-fiber, the new Audi A8L is comparatively light in weight than the ongoing model. Exterior wise, the luxury sedan is revived and is furnished with a single frame front grille. Besides, the front also gets the full LED matrix headlamps. Moving ahead, the sides of the upcoming Audi A8L features a much stronger, lower shoulder line that is contrasting with chrome strips running the length of the car till the rear. The rear gets fascinating OLED tail lamp along with the chrome-tipped dual exhausts that add elegance to the new Audi A8L.

Read Also: Nissan And Datsun Will Increase Prices From January 2018 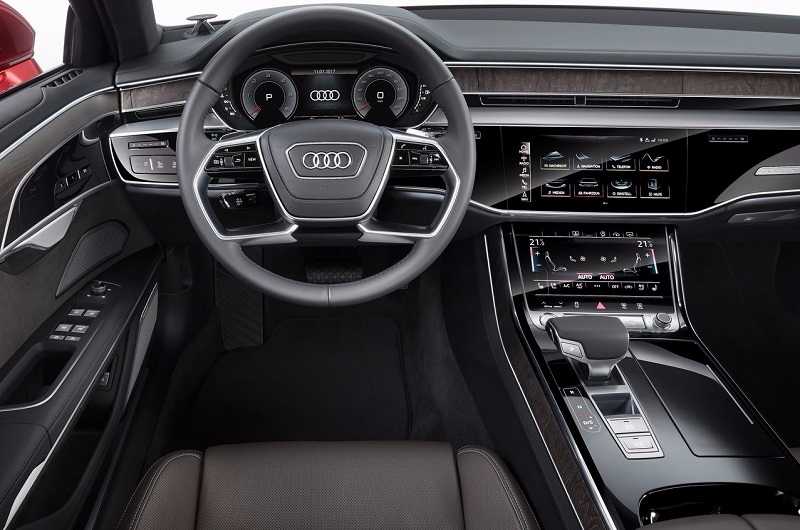 Inside the cabin, the interior is upmarket and premium in nature that is adorned with Audi Virtual Cockpit for the instrument cluster and two 10.1 inch and 8.6-inch touchscreen HD displays at the center console. Other than this, the dashboard that is furnished with a single piece of wood runs from one end to the other while the other features are decorated with hard-touch materials in the piano finish. On a happy note, for the coming new year, Audi is offering a host of new offers.
Beneath the front end, the new Audi A8L could be offered with a 3.0-litre turbocharged V6 engine. The 3.0-litre diesel engine is capable of generating 286PS while the TFSI petrol unit of the same generates 340PS of power. Expectations are one of them will be equipped with mild-hybrid capabilities.

In the segment, the flagship sedan model of Audi will compete for the flagship models of competitors such as the Mercedes-Benz S-Class and the BMW 7 series. The model is likely to be tagged with a price sticker of Rs 1.30 crore to 2.0 crore (ex-showroom Delhi).

Lifestyle Edition of Audi Q7 SUV and A4 launched in India
Views: 1715