Launched late in January month this year, the Bajaj CT100B hit the market at the price tag of INR 32,668 (ex-showroom, Mumbai). Reportedly, The CT100B is on sale on the e-commerce web portal, Paytm at INR 27,668, after providing a big amount of INR 5000 as cashback. The ex-showroom price at Delhi dealership is INR 30,990 which is approx INR 4,000 less expensive than the entry level (spoke-wheels) variant of the predecessor, Bajaj CT100.

Optically, the CT100B comes featured with the following aesthetics that encompasses a new circular headlamp, spoke wheels, a new comfortable larger seat than the CT100’s, a rear placed luggage carrier that is coupled to the grab rail as a complete unit, and the covered rear cowl by the seat. and the CT100B orginally resembles as the first featured image in the news.

This newly launch Beta version of Bajaj CT100, houses the similar single-cylinder, air-cooled, 99.27cc displacement engine of the CT100. The four-speed gearbox concatenated engine has obtained some refinements to make it capable to produce power of 8.2PS at 7,500 rpm and the torque figure of 8.05 Nm at 4,500 rpm and to dispatch the claimed mileage figure of 99.1 km/l that is approx 10 km/l higher than the predecessor Bajaj CT100. 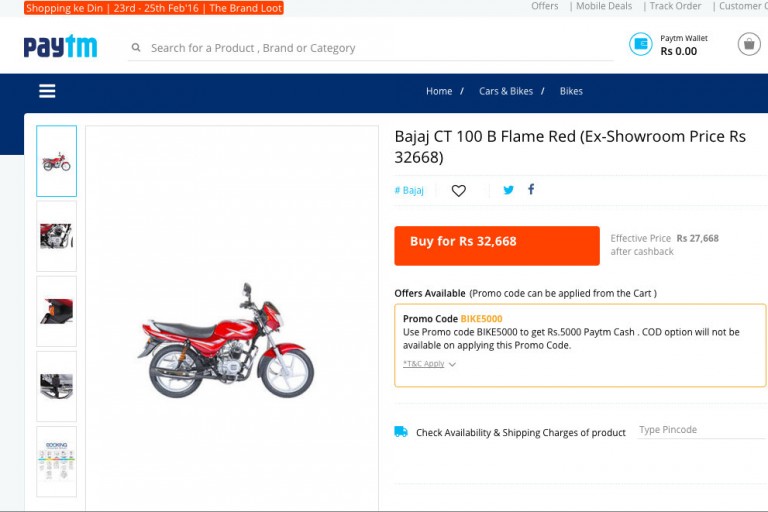 Bajaj CT100B’s sale on Paytm and INR 5000 cashback, made this the fuel efficient and least priced commuter in the Indian motoring market. Let's see, how much sales figures will be reshuffled by this strategy of the automaker. For further updates, continue to stick with us.