In the coming future, the Indian biking industry is going to witness events will be remembered until late in time. The government mandate advanced safety features norm will hit the country in April this year. While the country will move to more stringent emission norms BS-VI from ongoing BS-IV in lieu of keeping the environment sustain for breathing with the reduction in pollution. For which the two-wheeler manufacturers are already in advanced stages of developing vehicles compliant with BS-VI norms. It could be considered a brave step from Indian government of skipping an entire stage. The bike makers are re-engineering existing BS-IV engine or crafting new units from scratch.

However, there’s a time in government implementing more stringent emission norms albeit the country is all set to observe implementation of advanced safety norms which made compulsory to vehicle two-wheeler with engine capacity under 125cc need to be equipped with the CBS as standard fitment. While the above displacement vehicles will get ABS as standard.

The Bajaj Auto which has updated its highly popular Pulsar range (150,180 and 220cc) models, is now active to alter their sub 125cc two-wheelers with the CBS feature. One out of these models, Bajaj Discover 110 spied lately performing test runs with the CBS equipment. The red colour number plate confirms it as a test mule. Apparently, the motorcycle was undisguised and not wearing any sorts of modification at its skin. It clearly hints that the work done from manufacturer is at powertrain or braking front. 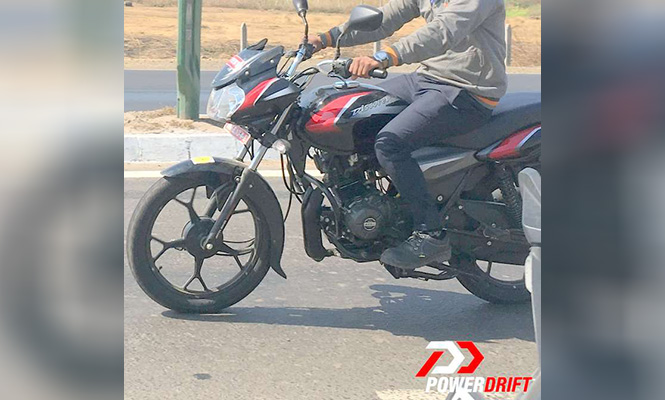 The Discover CBS is powered by a 115 cc single cylinder air cooled engine. The mill is being said to develop the maximum power of 8.6 PS along with 9.8Nm of torque. This comes mated to a 5-speed gearbox. The motorcycle will be offered in both the trims- Disc as well as drum. The spy shots reveal a drum brake variant which is currently available on the retail of INR 52.4k (ex-showroom). The addition of CBS will add a premium of around 1k in its pricing.

Similar: Does 125cc Bike Need ABS or Not?

We can expect major changes at the powertrain due to automaker has a vision of updating model to comply with the upcoming emission norms. We could see the inclusion of components such as new cylinder heads with a certain 4-valve arrangement, improved ignition system and reduced frictional losses as well. In addition to being cleaner, we expect better ride quality and fuel efficiency from the improved mills.

The Pulsar range which has updated with the new safety norms seems to get new BS-VI compliant powertrain later in time. While, the brand’s flagship, the Bajaj Dominar 400 has been debut online in its 2019 model year version via presentation document leak. It has improved not only at the cosmetic front but also at the mechanicals, features and cycle parts. It is expected to hit the dealerships in the coming weeks.