Well, here comes the unexpected moment. The most anticipated sports motorcycle from the Bajaj Auto Ltd. was spied during its testing. Another spy shot has come-up of the Bajaj Pulsar 200SS and this time it was enjoying riding between the beautiful valleys and mountains at Leh. But this couldn't be more enjoyable as the motorcycle got stuck in the middle of the road. The rider was testing the all new Bajaj Pulsar 200SS, which is completely inspired by the Bajaj Pulsar 400SS, in the Barlacha La route, which connects to Leh. 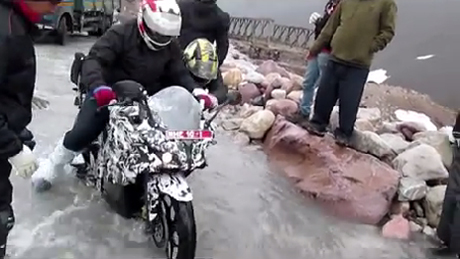 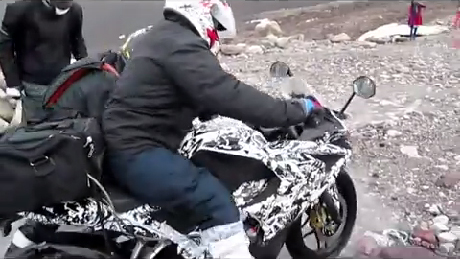 However, the released spied video doesn't help much, but still we are able to have a brief look of the Bajaj Pulsar 200SS/400SS. Technically the Pulsar 200SS is powered by a single-cylinder, liquid-cooled engine having an engine displacement of 199.5cc. The motor is coupled to a 6-speed transmission and is able to belt out a total power of 23.18 BHP @ 9500 revs and a peak torque of 18.3 Nm @ 8000 RPM. The fully-faired sports motorcycle will be making its appearance in the Indian market by the coming year, 2015. And, above all the Bajaj Pulsar 200SS is expected to carry a price tag in between Rs 1.30 lacs to Rs 1.40 Lacs.