The Italian legendary one, Benelli unveils its four new models-Tornado 300, TRK 502, BX 250 and Naked T-135 in distinct segments to refresh and to provide a wider range to the likes of the Benelli. The gradually improving market of the company may get a kick start from these unveiled models at the 2016 Delhi Auto Expo. The marque rendered most of its promised models slated for India launch, but pull back its highly anticipated scrambler offering, Benelli Leoncino from the index. However the automaker signalizes to launch three bikes altogether with Benelli Leoncino, next year.

The Benelli Leoncino, first unveiled at EICMA in Milan, last year. As if gazing over its body cues and detailings, built around the steel trellis frame motorcycle gets retro styling round headlamp, LED turn indicators also with less bodywork at the rear section to the tail lamp. The twin twp exhaust muffler, off-road tyres, sculpted seat and digital instrument cluster made it a superb scrambler. 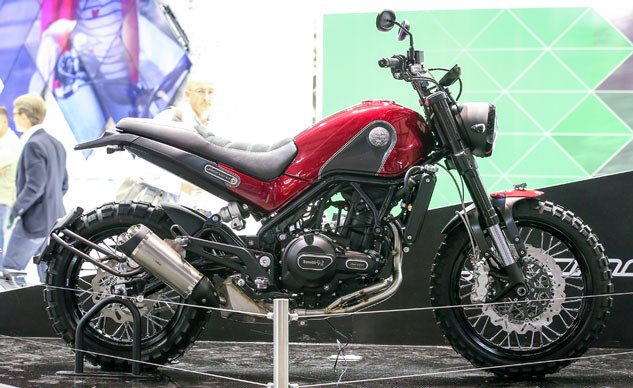 Built around steel trellis bolted frame, Leoncino will get the propelling power from a newly developed twin cylinder, liquid-cooled motor with a displacement of 499.6cc. The engine manages to deliver power of 47.6hp at 8500 rpm and torque of 45Nm at 4500 rpm with the contribution of a 6-speed transmission. The suspension setup gets USD front forks and monoshock suspension at the rear to absorb the shocks, whereas stopping responsibilities will be taken care via disc brakes at both wheels with ABS offered as a standard.

Shirish Kulkarni, Chairperson, DSK Motorwheels stated at the press release that “the company has three products planned for next year and one of them will be the Leoncino scrambler. The company's new model looks impressive and will be offering something different in the middleweight segment compared to the current set of models. The model will also serve as a more affordable option to the equally fun looking Ducati Scrambler”.

Mr Kulkarni further added, “the Benelli Leoncino is expected to command a higher price tag when launched in India. The scrambler despite sharing the same engine as the TRK 502, is based on a completely new platform and also carries a more premium design language. In addition, a lot of components are of higher quality that contribute to the premium asking price on the model. As a result, the Leoncino is likely to carry a price tag between 6.5-7 lakh (ex-showroom)”.