Benelli that’s here in India in its second inning with new partner, Adishwar Auto Ride India, has lately launched its middleweight adventure-touring motorcycles, the Benelli TRK 502 and the TRK 502X. Evidently, both the trims share similar styling. Apart from that, there are fitments which are common on both the TRK 502 and the top-specs TRK 502X models. Including a twin-headlamp setup with LED DRLs, a large windscreen over it and a sharp beak-like structure as well which offers an aggressive appeal to the bikes’ fascia. Add-ons to this belligerent appearance are a massive 20-litre fuel tank with muscular tank shrouds. The powering unit beneath the fuel tank is also a shared bit among the siblings that’s a 500cc, parallel-twin engine. Mated to a six-speed gearbox transmission, the mill is capable of generating the maximum power of 47bhp along with the peak torque of 45Nm.

Besides boasting that many similarities, the motorcycles carry different price sticker of INR 5 lakhs and INR 5.40 lakhs respectively for the models the TRK-502 and the TRK-502X. So the question arises Why there’s different of INR 40,000 among their pricing? Here’s Why

These are aspects which one can observe in a glance. The TRK 502 that is touring focused bike and meant for long highway hauls comes equipped with 17-inch alloy wheels wrapped up with Pirelli Angel GT tyres at both the front and rear. On the other hand, the Benelli TRK 502X sits on spoke wheels- 19 inch up front and 17-inch at the rear. They are shod up with dual-purpose Metzeler Tourance tyres meant for hardcore off-roading as well. 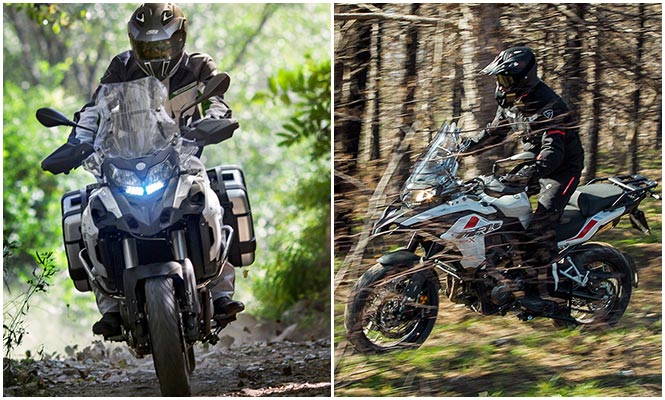 Well, among the braking setup both the TRK 502 and TRK 502 X share 320mm dual diss upfront and a 260mm single disc at the rear. However, the top spec trims TRK 502X features petal discs as compared to conventional units on the TRK 502 trim. Meanwhile, the comprises suspension setup on both the bikes are similar with 50mm inverted front forks and a monoshock at the rear. whereas, the offered travel distance stands at 135mm for front fitment and 45mm of suspension travel for the rear based unit. 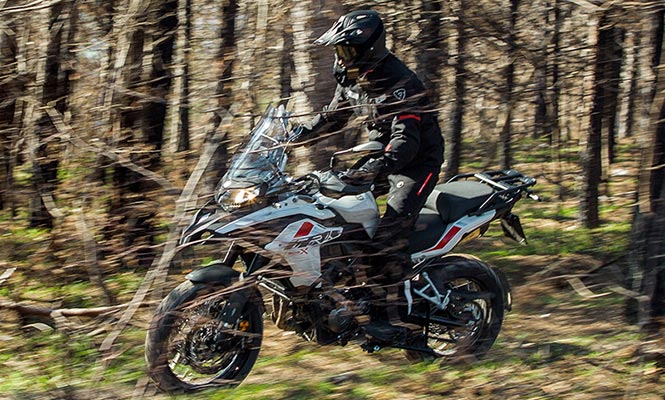 Other than the above-mentioned aspects, there are a few features which differentiate the capabilities of both the variants. The TRK 502X that’s an off-roader by nature gets engine guard comparatively bigger than one found on the TRK 502. In addition to this, there is a high-mounted exhaust and luggage pannier for better-touring capabilities. Meanwhile, the TRK 502 keeps a grab rail and a stubby exhaust unit.