BMW X7 which is the upcoming flagship SUV In the German carmaker’s Indian lineup spotted performing tests in India. The SUV was behind the camouflage stickers. Shares styling with the range-topping M50d, the new X7 is set to launch on January 31, 2019, at the India Art Fair in New Delhi. Here in India, the new X7 will get positioned over the ongoing X5 in the BMW’s lineup of SUVs.

The BMW X7 was showcased in front of the global audience at the 2018 Los Angeles Auto Show in November 2018. Two months later post its global display, the flagship SUV is slated to hit the Indian market, which proves Indian market importance in the automotive world. 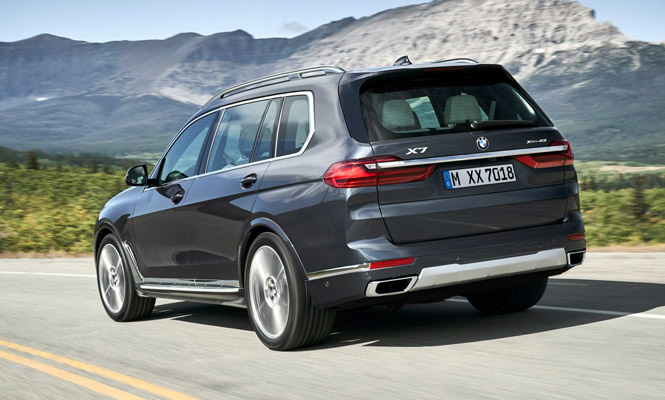 Seems inspired from the M50d, the X7 dimensionally measures 5,151mm in length, 1,990mm in width and 1,805mm in height. While under the hood, the SUV will be offered in a number of engine options. There will be a quad-turbocharged, 3.0-litre inline six-cylinder diesel engine which is rated to churn the massive output of 400hp and a 760Nm of torque. The 3.0-litre straight-six turbo-petrol engine, on the other hand, makes out 340hp for the xDrive40i variant. Last but not least, the xDrive30d variant which will use 265hp from 3.0-litre straight-six turbo-diesel engine setup will join the siblings sometimes in September 2019. The transmission setup in all the above-mentioned engines setup will be an 8-speed automatic gearbox with BMW’s xDrive four-wheel drive system with surface-specific modes.

Inside the cabin, the X7 is all similar to the X5, the only difference is of seating configuration. It comes with three rows of seating with six and seven-seater configurations. Other than this, the cabin is decorated with components such as the digital instrument cluster with a large 12.3-inch touchscreen infotainment system. Also, the company gives the convenience of four-zone climate control, reclining function for all three rows, a three-piece glass sunroof, park assist and much more.

The BMW X7 M50d will hit the dealerships as a CBU model with price sticker INR 1.6 crore (ex-showroom). While the other range-topping variants such as the X7 xDrive40i and X7 xDrive30d will join later in time with BMW started local assembly of the new model. In its segment, the X7 will see competition with the likes of the Land Rover Discovery and the Mercedes-Benz GLS.

BMW X7 For India Will Be Official by October
Views: 2842

BMW X7 Production Delayed, Can be Launched in 2018 with a Hybrid Powertrain
Views: 3106