One of the most popular commuters from Honda stable, the CB Unicorn 150 has been modernised with the addition of ABS. The company is asking for a premium of INR 6500 over the standard non-ABS trim for this advanced safety net. Now, one has to shell out the updated amount of INR 80,476 (ex-showroom, Mumbai) for 2019 CB Unicorn 150 ABS. in the 150cc premium commuter segment, the bike takes heavy combat with the Bajaj Pulsar 150 ABS (twin disc). Here in this post, we are comparing models on significant aspects one would consider before purchasing a bike. Have a look at this quick on paper specs comparison of rivals.

In terms of body language, the Honda CB Unicorn 150 ABS is a decent offering with a few components with noticeable curves. At its face, the motorcycle features a large headlamp accentuated by a chrome strip on top. While the fuel tank is a round unit along with a long tail section. On the other side, the Bajaj Pulsar 150 ABS is more on the sportier side. It gets clip-on handlebars, angular tank extensions, chiselled panels and split seat. While the sharp graphics job adds to its appearance. 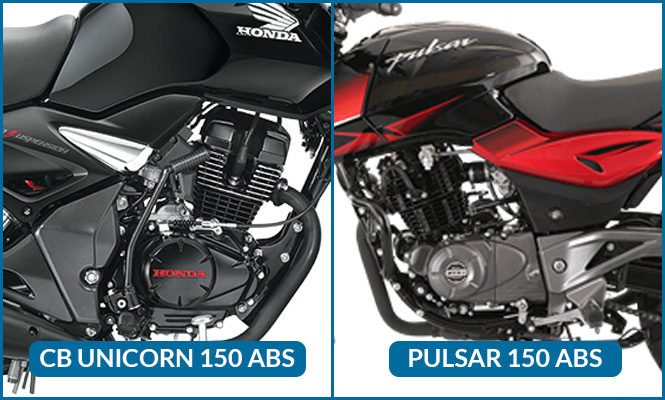 The Honda CB Unicorn 150 is packed with a reworked 149.1cc, air-cooled, carburettor engine. The motor is claimed to make out 12.73 bhp of power and 12.8 Nm of torque. The Pulsar 150, on the other hand, uses slightly more power output of 13.8bhp and 13.4Nm from 149.5cc, DTS-i, air-cooled, carburettor motor underneath the fuel tank. The power transmission duty on both the bikes is handled by a five-speed gearbox unit.

Runs on 17-inch wheels, the Bajaj Pulsar 150 suspends over the telescopic forks up front and twin, gas-charged shock absorbers at the rear. While the braking here is managed by the composition of a 260mm front disc and a 230mm rear disc armed with a single-channel ABS. The fuel tank unit here is of capacity 15-litres. On the contrary, the Honda CB Unicorn 150 uses slightly larger 18-inch wheels. 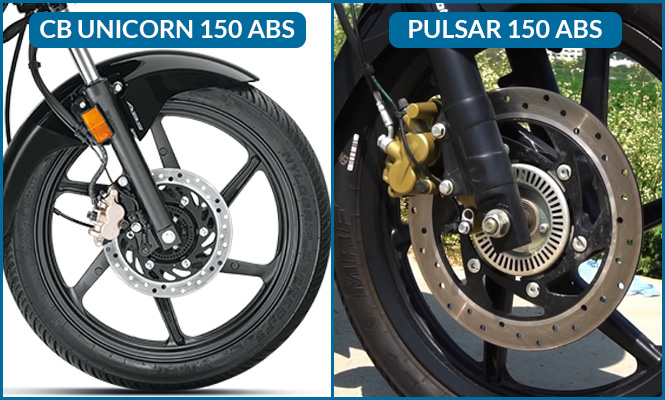 The suspension setup comprises telescopic forks on the front and monoshock unit at the rear. The brakings setup here consists of slightly smaller disc units of measuring 240mm and 130mm at the respective front and rear wheels. Not even this, the fuel tank is also offering less fuel tank capacity as compared to the Pulsar.

One of the major factors for any bike comparison in India is pricing. The Honda CB Unicorn 150 ABS is handy at INR 80,476. While the Bajaj Pulsar 150 ABS (twin disc) makes one shell out the premium amount of INR 87,226. However, both the bikes have different fan base depending upon their styling and performance. The Unicorn 150 at a side is an ideal commuter with a refined engine and conventional body language. On the other side, the Bajaj Pulsar 150 is a sports commuters with more features and power.