The Italian marque’s Indian arm DSK Benelli is all prepared to expand its product portfolio in the coming future. It’s been a long time since the introduction of Benelli’s range starting model, the TNT 125 in the Indian mart. The new addition includes the emergence of two flagship products in different categories. Recently, out of the lined up, the fully faired supersports offering-Benelli Tornado 302 has been confirmed to launch in December this year. While, the next one, Benelli TRK 502 as per the sources is likely to be debuted in early next year.

Earlier, both these motorcycles were the part of current year project, but the endurance check and testing procedure at ARAI has delayed the planned launch of both the vehicles. Originally, both the bikes were on cards to land on the Indian soil by this festive season. Ideally, one of the most accessible adventure tourer, the TRK will certainly make its presence sometime after three-four month in March or April in 2017.

Back in history, the Benelli TRK 502 was firstly previewed at the 2015 EICMA Motorcycle Show. And, on the Indian grounds, it was also one in the list of the most gathering audience at the Benelli’s podium at the 2016 Delhi Auto Expo. 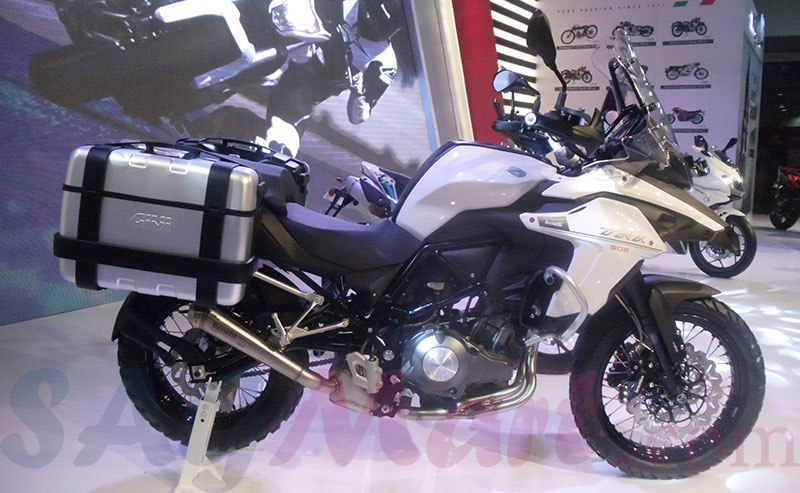 A true adventure tourer is loaded with all the meaty off-road focused attributes as spoked wheel wrapped with knobby tires, USD front forks and rear mono shock-both with the distance travel of 150mm, and the excellent ground clearance of 230mm.

As far as powertrain considered, the light weighted TRK 502 is able to run on to broken and no-road conditions easily with the aids of housed 500cc, parallel-twin, liquid-cooled powertrain. The engine assembly is tuned to produce a massive power of 47bhp and dispatching 45Nm of torque to battle with the renowned Indian road conditions. The engine setup is in collaboration with the six-speed gearbox transmission.

At the time of launch, it is anticipated to tagged with the price sticker containing competitive price value of INR 6-6.5 lakh (ex-showroom), to lock its horns with the already available Kawasaki Versys 650 in the Indian motoring market.