With the launch of the Ducati 2018 Monster 821, the naked performance bike segment in India has got a new competitor. Earlier the models such as the Triumph Street Triple RS vs Kawasaki Z900 lock their horns in order to prove dominance in middleweight 800cc naked sports genre. The Monster 821 that has been updated for calendar year of 2018, is actually a model pays homage for the Monster 900’s legacy being carrying forwarded from over 25 years. A simple yet sporty, agile and powerful roadster, that offers a perfect blend of performance and ease of riding. Here in a comparison on the basis of aspects such as design, powertrain, technology and pricing, we are trying find the winner in this clash of the titans.

In terms of design, the new Monster 821 is 100 percent Monster which keeps the original lines of the bike born in 1993. The volumes, silhouette, tank and headlight are being offered with a modern touch. Designed to be a slim, simple and sporty motorcycle, the new Monster 821 gets once again the same bright yellow paint to attract the audience. Furthermore, the nuovo Monster 821 features a contemporary round headlamp and a fastening hook on the iconic and unmistakable fuel tank. 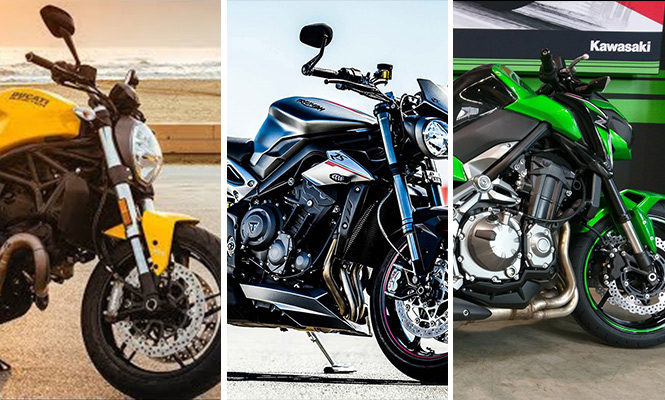 On the other hand, the Kawasaki Z900 which was introduced on Kawasaki’s 40th anniversary, is designed by brand’s studio in Paris, France. It is an aggressive monster in the middleweight motorcycle with peeking mechanical components and no fairing.

Based on a trellis frame, the new Monster 821 uses twin-cylinder Desmodromic Testastretta 11° engine as a structural element of the chassis. The engine is displaced with 821cc volume. The equipment such as tailor-made optimised exhaust and intake systems, the Testastretta 11° engine churns out the peak power of 109hp without witnessing the reduction in the torque curve.

The new Triumph Street Triple RS is driven by a 765cc, inline-three engine. It is the similar unit that is used in the Moto2 category bikes of the MotoGP world championship. The four-valves per cylinder mill is responsible for producing 123PS at 11700rpm along with 77Nm at 10800rpm. The churned out power is sent to the rear wheel via a mated 6-speed gearbox with chain drive.

Last but not the least, the naked performance Z900 beast from Kawasaki is powered by an 948cc, liquid-cooled, 4-stroke, DOHC, 4-cylinder engine. Mated to a six-speed gearbox with wet, multi-disc clutch, the engine expels 125bhp at 9500rpm along with 96.6Nm at 7700rpm.

All the technology front, almost all the three vehicles in question get the state of art technological aspects. Though, it would really be interesting to know which one is wealthier than others. 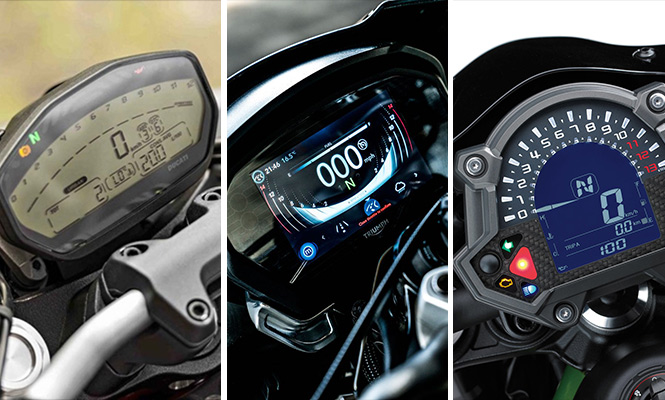 The 2018 Monster 821 from Italian marquee incorporates all-LED headlamp, a new TFT instrumentation screen with a fuel gauge and a gear position indicator. In addition to this, the electronic package of the motorcycle is loaded with the attributes including 3-step ABS, 8-step traction control and three riding modes along with three power modes. Cumulatively, all these features enhanced the performance of the agile and powerful naked runner.

The similar package on the new Street Triple RS is full-fledged with ride-by-wire, five riding modes (rain, sport, race, rider and track) and four level traction control (road, rain, track and off). The feature of ride-by-wire is not being provided in the new Monster 821.

It's pretty unfortunate for the Kawasaki Z900 admirers, the naked performance did not get the top shelf features of traction control, riding modes, ride-by-wire, etc. The only attribute that is being offered with the motorcycle to take care of rider and its pillion is the dual-channel ABS.

Those who are pondering to purchase a naked performance beast will not consider the price tag at all. However, if the question arises to select one from all of these middleweight motorcycles. The Kawasaki Z900 is the most affordable model that is on sale at the 7.68 lakh (ex-showroom). But the churned power output is higher than the new Monster 821 and marginally from Triumph Street Triple RS. But you won’t be availed with rider’s aids like riding modes, ride-by-wire and traction control etc, which are on offer on the others.

The models such as Triumph Street Triple RS and new Monster 821 are priced at INR 11.13 lakh and INR 9.5 lakh respectively. I believe that with the provided comparison you can easily make a decision for your companion on the basis of price, design, power and performance.