With increasing demand and expectation among the consumers, the automobile manufacturers have also minimized the time between one update and another. Besides, the competition among the carmakers has also reached the peak point and they are leaving no stone unturned to attract the buyers. The same thing can be realized by latest announcement of Fiat that is giving the indication of the upcoming facelift 2017 Abarth 595 range. Many upgrades have been revealed by the company that includes performance, design as well as styling.

There are two body type options available namely hatchback and Convertible along with three variants such as 595, 595 Turismo and the top-range 595 Competizione. Where the first one is the base model, which comes attached with all the regular elements to make the driving comfortable.  As the name introduce itself, the Competizione will be loaded with all the top-end features, while the 595 Turismo is stated to be comprised of all the welcome and necessary features.

Comes with a similar 1.4-litre T-jet engine across all the versions, but generating different powers. With this powerhouse, base model 595 produces 145 Bhp of power and 206 Nm of torque. To churn out the power of 165 Bhp and torque of 230 Nm, 595 Turismo is integrated with a Garrett turbine. Moreover,  the top-range 595 Competizione will leave an impression by giving you an output of 180 Bhp and 250 Nm of torque. 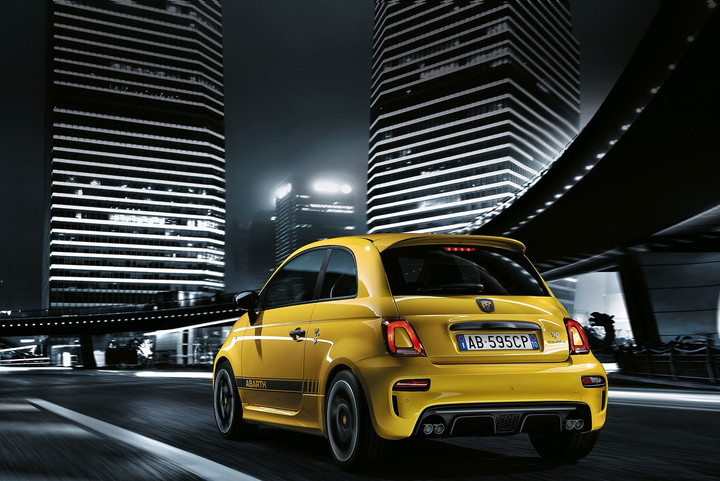 You may also read: BMW Launched its M4 Competition Sport Edition in Spain

A 5-speed manual transmission is mated to the 1.4-litre engine as a standard attachment in all variants while an Abarth robotised sequential gearbox with shift paddles can be fitted later. The information suggests, the car is first to be a drive in its segment with a mechanical limited-slip differential that helps in the angular velocity of the output shafts.

Further talking about cosmetic changes, it gets a redesigned front fascia that consists of, Polyelliptical headlights, while the Xenon headlights are an optional package, LED daytime running lights, fresh 17-inch alloy wheels and also the revamped air intake. Comes in seven new exterior colors, it has also been twisted from the rear side that gets restyled bumper.

Inside the cabin, you will get to see new upholstery, flat bottom steering wheel, and Alcantara and Carbon fiber to give it more sporty character. The dashboard is also embellished by carbon fiber, which is sourced from the 695 Biposto. Furthermore, a 5-inch touchscreen infotainment system is also standard for the all three variants, but there is also an optional 7-inch touchscreen music system present along with supportive navigation system, Apple CarPlay, and Google Android Auto. To make it more impressive, the carmaker has also attached a standard seven-speaker Beats Audio system with 480 watts.