Lately, a set of patent images for an Emergency Autonomous Braking System which will work on next-generation Harley Davidson motorcycle has been leaked online. The patent reveals that Harley Motorcycles will use several sensors which will scan motorcycle’s path in order to check hazards which may cause a frontal collision with a suddenly turned car or from an animal passing across the highway. All the information collected from sensors reached to controller process as per the situation if it senses an imminent collision. It applies brakes and actuates the clutch to decelerate bike or even can stop the bike.

However, such kind of emergency braking can throw the rider off the motorcycle as unlike the car, the bike does not have seat belts. To handle such conditions, the Harley-Davidson system uses additional sensors which will determine whether the rider is prepared for such emergency braking, physically or mentally. For checking various body parts there are different sensors. The handlebar sensors determine the rider has both hands on the handlebar. The sensors on the seat will check out that the rider is standing on foot pegs or not. And the cognitive sensors on the instrument panel and even inside the helmet to track the rider’s eyes. 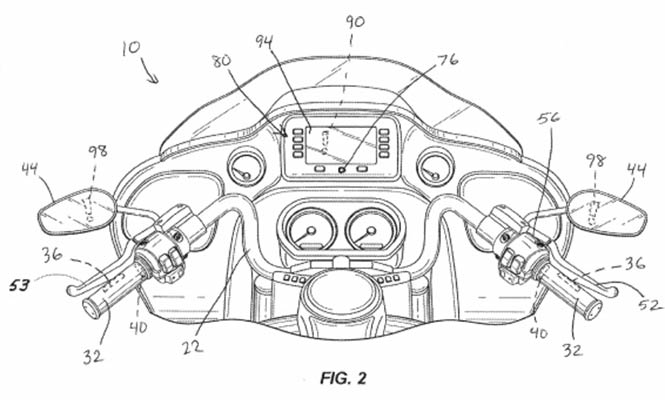 There is no need for autonomous braking system activation if the sensors determine that the rider has the situation under control. As of now, the technology is in the patent phase, so there is no confirmation when it will be in the development phase. Only the future will tell that we would see these rider assistance electronic system on upcoming bikes or they will feature a completely different system to sport the rider from such an incident.