Hero Splendor iSmart 110 Set to Launch in April This Year

The All new Splendour iSmart 110 from the country’s largest two wheeler manufacturer, Hero Motocorp is all set to hit the motoring market in April this year. Unveiled at the recent Delhi Auto Expo, the new Splendor iSmart, as per the report of the daily online portal is expected to launch in April while the automaker did not reveal the exact launch date till now. The motorcycle is anticipated to carry the price tag of 56,000 (ex-showroom, Delhi).

Visually, The new Splendor iSmart seems similar to its younger brother and features dual tone paint scheme to give an unconventional appeal. The showcased models at the Delhi Auto Expo ware painted in Red-Black and Blue-Black color schemes. 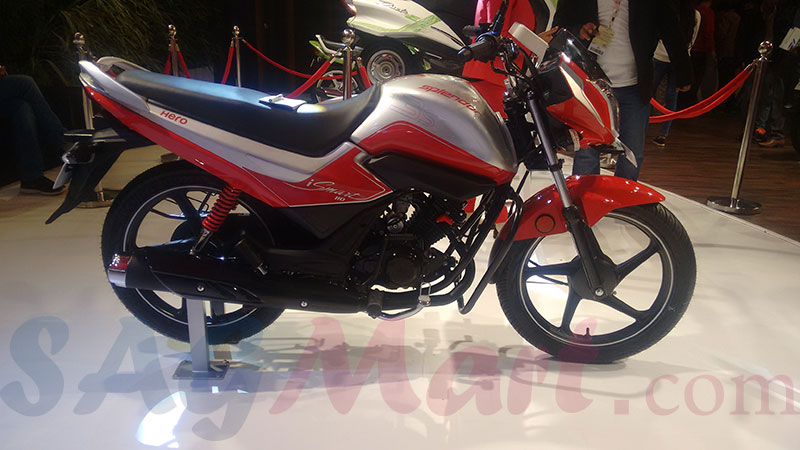 Built around a single downtube frame, the motorcycle houses a beating heart of an all new single cylinder, 4-stroke engine with the displacement of 110cc. The motor is able to generate 9 percent more power, around 8.9 bhp at 7,500 rpm, than its younger sibling and torque of 9Nm at 5,500 rpm. The claimed most fuel efficient bike ever produced 6 percent more mileage than its existing version. The front telescopic suspension and twin shock absorber completes the suspension setup and drum brakes at both wheel responds for the braking duties.

When launched, it will pitted against the recently launched Victor from the TVS arm and the Honda livo which listed as the top 10 selling bikes in the January month this year. The i3s technology equipped motorcycles are the best fuel efficient motorcycles in the market. The I3S is a battery operated sensor circuit that automatically turns off the engine and can turn the engine on again just by pressing the clutch. The motorcycle will definitely help to increase the sale of the automaker after launch. After all Splendor already have a good brand value in India.

Hero MotoCorp Armed its Commuter Bikes with the Safety of SBS
Views: 2139