The high-end VX variant of the Amaze CVT is now available. The people who were waiting for it can now grab it in two engine options i.e. petrol and diesel. The petrol variant of Honda Amaze VX CVT costs INR 8.57 lakh while the diesel variants comes with the price tag of INR 9.57 lakh (ex-showroom pan-India). This price tag is Rs 83,000 higher than the VX-MT variant and Rs 41,000 more than the V CVT version. The company has launched the VX variant at the perfect time as the customers will not have to show miserliness in taking the advantages of the features which were restricted in the VX-manual variant.

As compared with the V CVT variant, the VX CVT variant features a 7-inch touchscreen infotainment system along with Apple CarPlay and Android Auto, reverse parking camera with guidelines, steering mounted controls, extra USB port and one-touch up or down for the window of the driver. But in the high-spec variant the company did not include the cruise control which is given to the VX MT variant. 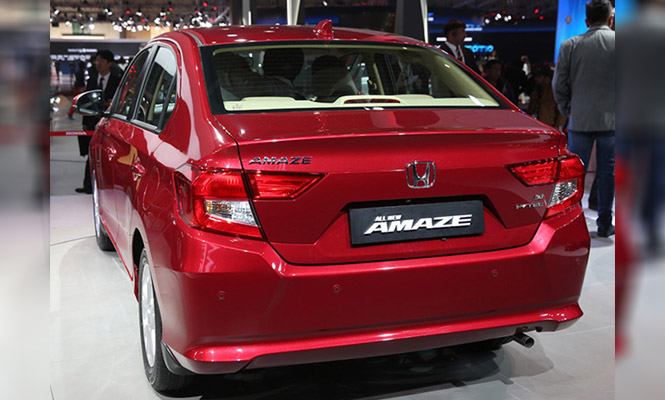 The company has also updated the safety features of the car to make the Amaze stand up to the expectation of the new safety norms which will be introduced on 1st July 2019. Earlier the sub-4 metre Amaze used to come with dual front airbags, rear parking sensors ABS with EBD, and ISOFIX child seat anchors as standard but now the company has also included a co-passenger seatbelt reminder and a high speed alert system.

Under the hood, the Honda Amaze carries the same petrol and diesel powertrains option like the other variants. The 1.2-litre petrol powertrain produces 90PS of maximum power and 110Nm of maximum torque while the 1.5-litre diesel engine churns out 80PS of peak power and 160Nm of peak torque. Both the powertrains are married to the 7-speed CVT gearbox. The petrol Amaze CVT produces equal amount of power and torque as compared with the Amaze  MT., on the other hand, the diesel Amaze CVT churns out 20PS and 40Nm lesser than its sibling. The company claim fuel economy number of Amaze petrol and diesel CVT is 19kmpl and 23.8kmpl respectively.

Accessories on offer for The All-New Second-Gen Honda Amaze
Views: 1385