Growing demand in the performance-oriented bike segment made the manufacturers roll out their flagship products in different displacement categories. The segment which is being highly preferred by the young audience is naked and sports in budgeted amount. Here we are going to compare three naked streetfighters which are highly in demand in the premium 150cc commuter segment. These are stylish, aggressive and obviously responsive in terms of performance are being described in the write down aspects.

All the three bikes share similar naked streetfighter stance. They are aggressive with forwarding mass centralization, have the muscular fuel tank with sharp tank extensions. All in all, the motorcycles are meant for those who demand commuters with outstanding appearance. 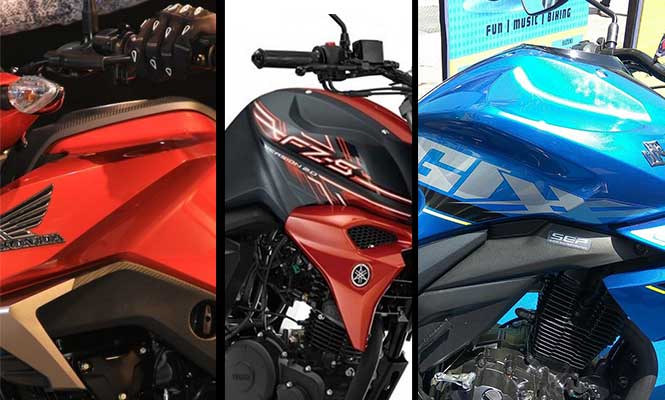 Each and every bike has distinctive elements which made them stand apart from the crowd. The Yamaha FZ S V2.0 has its signature tail section, while the Gixxer from Suzuki pulls audience attention from its beefy dual exhaust outlet. The recently launched 2018 Honda CB Hornet 160R gets an upmarket full-LED headlamp setup.

In terms of features, all the three motorcycles are blessed with almost all top selves bits being provided in this category bikes. They receive an all-digital instrument cluster which readouts speed, tachometer, odometer and fuel gauge. However, the Yamaha FZ S V2.0’s LCD unit doesn't display clock that is common in both the Suzuki Gixxer and the CB Hornet instrument console. Apart from this, the advanced safety feature of ABS is only being provided as an option on the lately updated Honda CB Hornet 160R. 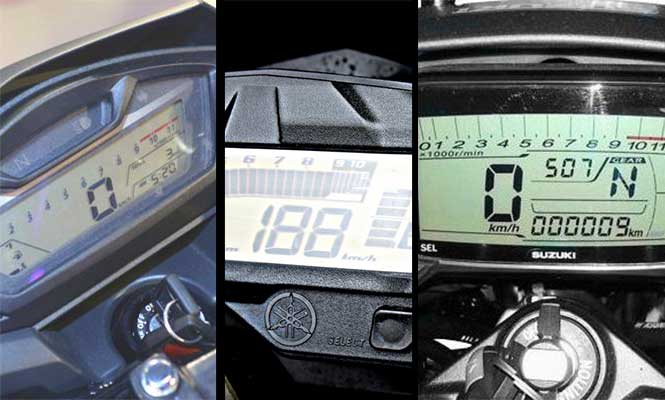 The most important cycle part for any two-wheeler, Brakes are being supplied as disc at front and drum unit at the rear wheel on the base variant of all the three bikes. Though, the brands are also offering the top end rear disc variant which not only ensures safety but also offers a confident fun ride. The suspension setup that comprises a telescopic front fork and rear monoshock mounts on 17-inch wheels in all the three bikes.

The CB Hornet 160R comes packed with a 163cc, single-cylinder, air-cooled engine that churns out 15.7bhp and 14.76Nm of torque via a mated five-speed gearbox. The Gixxer propels with the sent power of 14.6bhp to the rear wheels generated via a 155cc single-cylinder air-cooled engine. The rollout torque figure is 14Nm for the powertrain. The transmission duties are under the concern of a five-speed transmission. 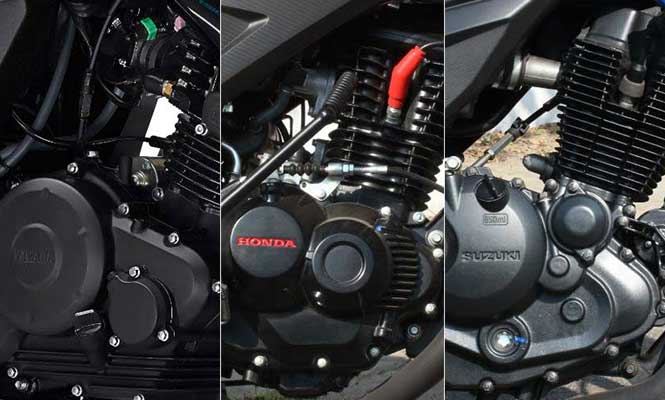 The Yamaha FZ S V2.0 uses an air-cooled, 149cc single-cylinder engine to power the bike. The integrated fuel injection system sports in spitting out the maximum power of 13bhp along with 12.8Nm of torque. All the generated power sent out to the rear wheel via a mated five-speed gearbox.

The Yamaha FZ S V 2.0 is available in two variants-the standard and the rear disc brake variant which are priced at INR 83,042 and INR 86,042, respectively. Furthermore, the company also offers two special edition models which are Dark Night and Limited Edition, priced at INR 84,012.

The most accessible naked streetfighter in all the Suzuki Gixxer is being offered in three variants of the rear drum, the rear disc with dual tone shade and the SP with rear disc variant. The pricing for all these variants is INR 77,015, INR 80,929 and INR 81,926 respectively.