KTM 125 Duke that is an entry-level Duke variant which has launched in India. In its segment, the motorcycle does not see any competition as of now owing to unavailability of any model with such specifications, features and price. Albeit, lately an event of listing the CB300R on official Honda website for India make biking enthusiasts or experts think over the inclusion of the CB125R in Indian lineup in coming future. As the Honda CB300R features similar Neo Sports Cafe design and styling of CB125R. The factors which you would find differences in both the bikes are the 125cc powertrain and sharp fuel tank panels on the CB125R.

If and when the Honda CB125R will hit the Indian shores is not certain yet though we can consider it in the near future. In this quick comparison let’s find out how these bikes stack up against each other on papers.

Both the bikes KTM 125 Duke and Honda CB125R are packed with prominent features such as USD forks, wide tyres and an-all digital instrument console. The CB125R launch will end up the need of any motorcycle in the 150cc segment as with changing times buyers are heading their focus on the bikes with environment-friendly engine sizes. Also, the increased insurance slabs and mandatory-ABS are already taking up the prices of 125cc+ motorcycles in the country. However, the light 126 kg weight easily manages the power limitation from the 125cc engine on the CB125R. 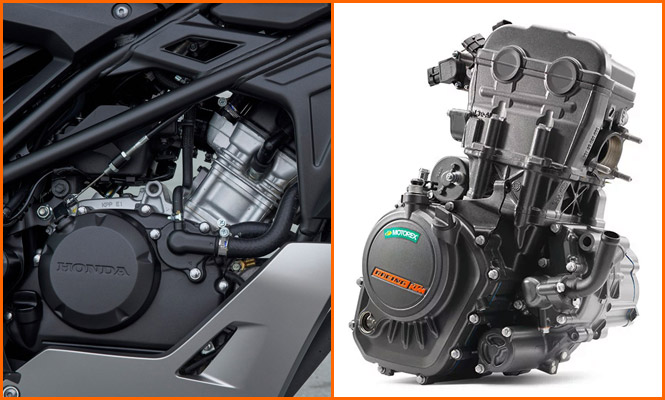 Based on a Diamond Frame, Honda CB125R is powered by a 125cc, single-cylinder, air-cooled engine. The fuel injected powertrain pumps out the maximum power of 13.2 PS @ 10,000 rpm along with 10 Nm @ 8000 rpm. While the power transmission is handled by a six-speed gearbox.

On the suspension front, both the naked streetfighters are equipped with USD telescopic suspension up front and monoshock unit at the rear. While the braking duties on Honda CB125R are under the supervision of a 296mm disc at the front and a 220mm disc unit at the rear. On the other hand, the KTM 125 Duke is armed with 300mm disc up front and 230mm disc at the rear. Going to be a mandatory safety feature, ABS is also being offered with both the bikes though as a single channel and dual-channel unit respectively.