Since 20 years, Honda City has been holding its position in the Indian market even after the existence of new competitors. Out of total sales, 25 percent market share was generated by the Honda City across the country. Honda city is quite popular amongst the consumers. It could be seen from the fact that recently its 7 lakh units were sold to the Indian consumers across the country. Here is a quick 20 – years journey to Honda City that the company has tackled in India.

Honda City has undergone four generation changes and its first three models that were sold in India could run only on petrol. The first generation Honda City was the original Sedan which was low in height at that time and missed out some basic features but it had come with brilliant dynamics for driving. It was available in two petrol engine options - 1.3L (90PS) and 1.5L (100PS) D-Series engines whereas the famed VTEC (106PS) Engine launched earlier in 2000, was considered better for its performance and was expected it would replace the other 1.5L. Nearly 59, 378 units of this generation had been sold by the Honda City company for the duration of 1998 to 2003.

The second generation Honda City was launched earlier in 2003. It had 1.5-litre i-DSI (78PS) engine rather than VTEC and had come with a CVT transmission as an optional, this was the first time for the Indian car. On the basis of its attractiveness and appreciation, the Honda launched a loaded ZX variant earlier in 2005 and re-launched the 1.5-litre VTEC (100PS) as an option, whereas original VTEC was still preferred by the car buyers.
In order to increase the fuel efficiency, the company modified the mechanism of the car engine which in turn decreased the performance figures drastically. Nearly, 1,77,742 units of this generation had been sold by Honda within five years of its production. 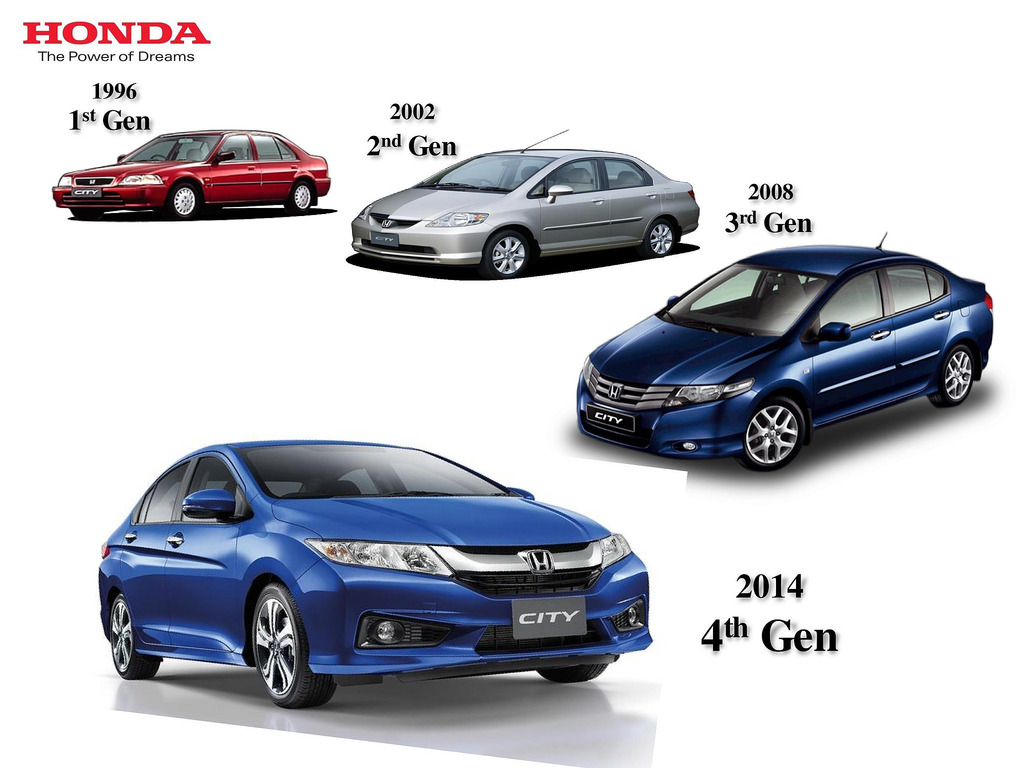 The third generation of Honda City was sleeker in terms of its external appearance and the company stopped manufacturing i-DSI version, the name of V-Tech had been changed to i-Vtech. The power figures of 4 Cylinder, 1.5-litre engine was enhanced to 116 PS in 2008.

The front of the third generation Honda City had the appearance of a Japanese arrowhead and it bore slim -look at the rear side similar to that of BMW 3 series. Due to non- availability of diesel engine, the demand of this model decreased considerably and the company could sell only 1,92,939 units of this generation model even when there was growing demand of cars in the market.

Earlier in this year, the Honda city had launched a facelift and previously it was launched in 2014. In the history of 16 years, the Honda had introduced a diesel engine option with 1.5-litre, 4-cylinder i-DTEC. Honda said that 4th generation is one of the best selling models as an option of two different models are available under this. The latest generation of Honda city has a more stylish look and is more captivating especially after the minor modifications done earlier this year. Nearly 2,76, 095 units of fourth-generation model has been sold by Honda until November 2017.

Honda City is that model which actually helped Japanese companies to run and expand their business in India. It is anticipated that the Honda is likely to launch six more new models with the hope that introduction of more new models would prove to be the blockbusters and the sales of the cars would keep rising.