As we all know, the Indian automatic scooter segment is expanding every day. There are new launches or existing models upgrade every new day. Following the same, the Honda Motorcycles and Scooter India brought in a new variant of the Dio in the 110cc automatic scooter segment. That is named as the Dio Deluxe. It will really be interesting to see that how this new comer will compete with the established and volume generating models like the Honda Activa, the TVS Jupiter, and others Yamaha Ray-Z, TVS Wego and the Suzuki Let’s. Here in this post, we are going to check competition between this newbie and the top of the line TVS Jupiter ZX variant on different written below aspects.

Apparently, the Dio Deluxe variant is not different from the standard model in terms of bodywork. However, the sportier graphics and the gold-finished wheels stand its apart from the crowd. The company is offering scooter in four colour choices including two matte and two glossy paint schemes.

The Jupiter ZX on the other hand is also a top of the line variant. As compared to the Dio Deluxe, it is pretty decent in styling. For the ZX trim, there is an exclusive palette containing colour options Stallion Brown and Royal Wine. in contrast with dual tone dura cool seat, the scooter looks appealing. Not only much cozier than the regular seat, the dura cool seat helps in maintaining temperature approximately 10ºC lower in sunlight/hot conditions.

The Honda Dio Deluxe gets a LED headlamp, whereas, the instrument cluster is a fully-digital unit and incorporates a service-due reminder. In addition to this, the sportier scooter comes with a new four-in-one ignition key assembly borrowed from the Grazia. That also features a seat release button. Whereas, the two storage hooks enhance the scooter’s practicality for carrying more luggage. 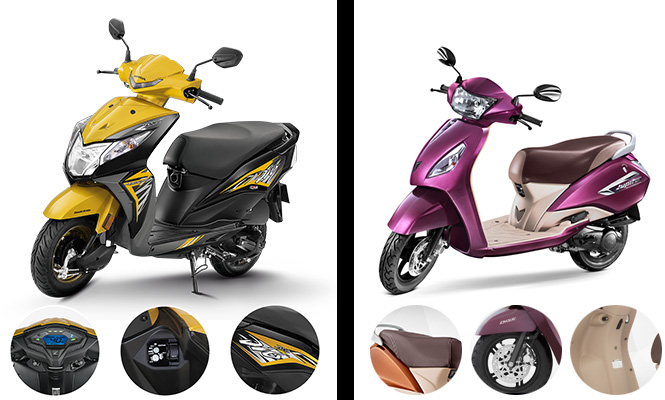 The Jupiter ZX that is a second lead in the scooter segment, gets features such as analogue instrument console with low fuel indicator. With the dual side handle look, the scooter can be locked either side. The availability of retractable bag hooks and large under seat storage ends up the trouble of carrying luggage and belongings. Furthermore, there is a provision of mobile phone charging and hassle-free fueling via external fuel fill.

The Dio Deluxe is powered by the brand’s tried and tested 109cc single-cylinder engine. Mated to a CVT transmission, the scooter is capable of producing 8bhp and 8.9Nm torque.

On the fill of the coin, the Jupiter ZX gets the propelling power from 109.7cc single cylinder, air cooled engine. In association with primary CVT and secondary gearbox, the mill churns out 7.88hp and 8Nm torque.

The major concern of protecting rider’s life on the Dio Deluxe is taken care by the drum brakes at both the wheels. However, they are in connection with the advanced technology of combi brake system that just with a single press of left lever activates the equalizer that distributes braking power between the front and rear wheel and offers skid free braking.

The TVS Jupiter ZX comes packed with the similar drum brakes unit though instead of CBS, this Jupiter variant uses sync brake system. The new SBS technology activates the front brakes whenever the rear brakes are used. It is one of the safest braking system being used in current models.

Well both the models are well equipped and attract almost similar price tag. One is sporty in nature while the other is a decent offering. So, the decision of the competition will depend on what will attract the audience. However, the Jupiter’s position in the market will definitely give it the benefit as it is one of the best selling scooters.