One of the best Japanese bike makers, Honda is giving shocks to the bike enthusiasts by revealing new concepts at 2016 Bangkok International Bangkok Motor Show. According to the reports, the Japanese giant has showcased its a new café racer concept, named the Honda 300TT at the ongoing Bangkok motor gala in Thailand. Talking about the newly revealed concept, it is a 300cc, single cylinder bike from the Honda that is inspired by the retro racing style motorcycle. 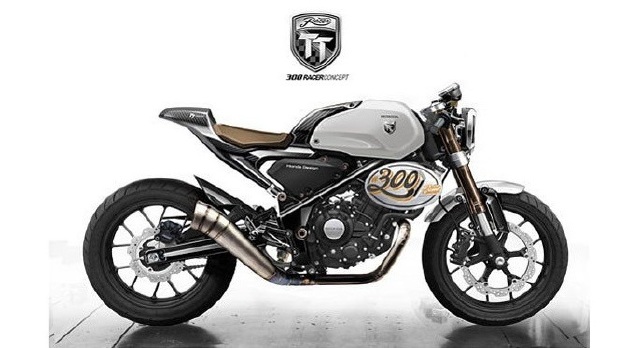 The old school bike gives a little bit look as the Honda's other products such as the CBR300R and CBR300F. The bike gets the power from the 286cc and single cylinder motor. The café racer receives a noteworthy features such as designed round shaped LED headlamp, flat handlebar, sporty single seat, and attractive bodywork. The bike offers a cool look as it is featured with sculpted fuel tank and high mounted exhaust. The motorcycle also offers a sporty riding position to the rider as it gets the compact handlebars and the rear set foot-pegs.

Check-out: Honda Motorcycle and Scooter Range up to 2016

Comes to the mechanical side, the suspension duties are managed by a conventional telescopic front forks with a beefier inverted suspension set-up. Overall, the Honda 300TT Racer is the best small-capacity bike from the Honda and we would really like to see this concept bike on Indian road soon.