The Indonesian arm of the Honda Motor-PT Astra Honda Motor has launched the all new CBR150R at the Sentul Circuit yesterday. The motorcycle unveiled by the MotoGP riders- Dani Pedrosa and Marc Marquez of the Repsol Honda. The new CBR150R is being priced to sell at IDR 32.9 million (INR 1.65 lakh) and the Repsol Honda MotoGP livery variant at IDR 33.3 million (INR 1.68 lakh) in Indonesia.

The automaker presents 2016 Honda CBR150R in three vibrating colors of Revolution White, Racing Red and Nitro Black with lots of cosmetic modifications, like new CBR150R is featured with LED twin headlamps, LED turn Indicators, sharp, edgy and chiselled front fairing, split and highly mounted pillion seat, new exhaust and revised foot peg position to make it a fastest offering. The cosmetic cues of the motorcycles blessed the motorcycle with an aerodynamic and faster looking appearance while at a standstill. 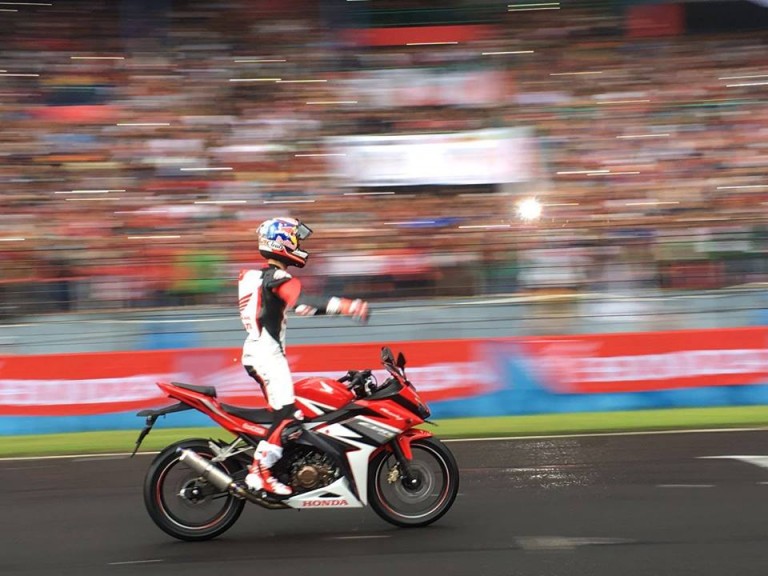 Honda also works on to reduce the weight of the motorcycle to make it lighter and faster, as motorcycle boasts lightweight chassis, 40 degree angle tilted engine and 13 mm longer swingarm in comparison to the older one. The motorcycle will get the power from the same 150cc, single-cylinder, liquid-cooled engine. The fuel injection system enables the new CBR150R to produce the power of 18.28 bhp and torque of 12.66 Nm. All the power will be transmitted to the rear by the six-speed transmission.