Jawa Motorcycles, a formidable Royal Enfield rival has ultimately hit the Indian motoring industry that will pose competition for the latter not only in terms of design but also in terms of heritage. Since Jawa Motorcycles is a globally acknowledged bikemaker for producing bikes with old-school charm in yesteryears. Now the time has come when the Royal Enfield has to think over conserving its title of market leader in the sub-500cc segment. As the Jawa Motorcycles will definitely bite into or undercut the rivals in the segment. Here is the comparison of legends which will make you decide your choice.

At the skin, both the bikes share a common taste of styling- the retro classic. Though there is a bit of difference, the Royal Enfield Classic 350 besides wearing an old-school charm in equipped components (round headlamp, single instrument cluster and minimal bodywork), it has a flair of modernization. The components here are neatly chiselled as compared to Jawa bikes which boast of pure retro appeal with its bulkier outfits. The chrome accent on Jawa bikes is significantly more across its bodywork than the RE Classic 350. 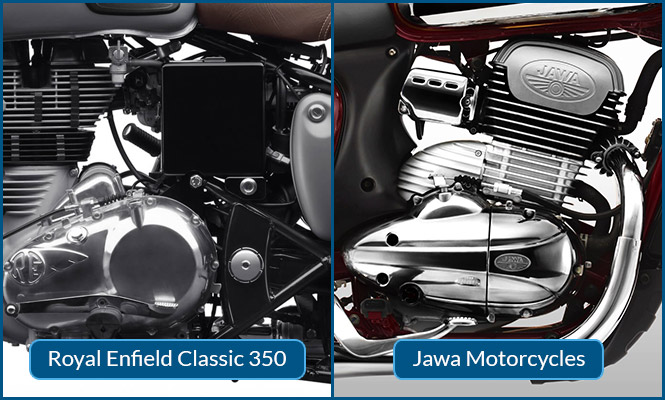 Under the massive fuel tank, the Royal Enfield Classic 350 is laden with a 346cc air-cooled engine with the long stroke. The motor is rated to develop the maximum power of 20PS @ 5250 rpm and transmit 28Nm of peak torque to rear wheel @ 4000 rpm. The transmission of generated power on the RE Classic 350 is handled by a 5-speed gearbox.

On the other hand, the Jawa bikes get a newly developed 293cc engine. Paired to a 6-speed gearbox transmission, the motor spawns out 27PS along with 28Nm of peak torque.

Wheels- The Royal Enfield Classic 350 stands on 19-inch wheel at the front and 18-inch unit at the rear. It comes wrapped up with Ceat type tubed tyres of measure 90/90 R19 front and 110/90 R18 rear. Meanwhile, the Jawa bikes use small size wheels of 17-inches at both ends. 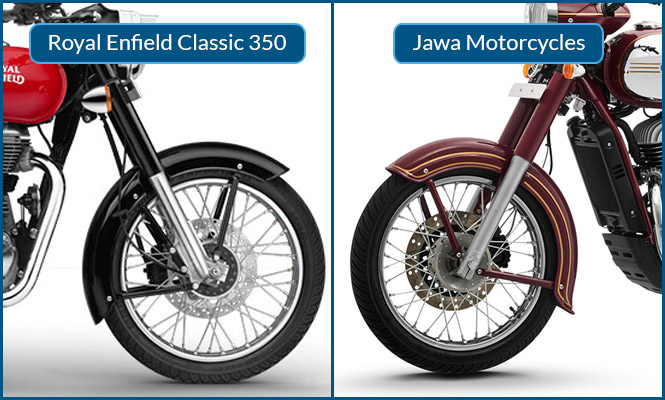 Brakes-Deceleration, control or braking on the Classic 350 comes from the equipped 280mm disc at the front wheel and 153 mm drum brake at the rear. New Classic 350 has received disc brakes at both wheels. However, the ABS is not introduced yet.

The Jawa bikes, on the other hand, feature the combination of disc and drum at the front and rear respectively. Altogether, a single-channel ABS is also being provided as standard for all the Jawa variants.

The pricing for the Royal Enfield Classic 350 starts at INR 1.39 lakh for drum brake variant whereas the variant with both discs and no ABS priced at INR 1.47 lakhs. In addition to this, in order to opt the range-topping dual channel ABS variant, you have to spend the amount of INR 1.62 lakh (ex-showroom).

Meanwhile, the Jawa bikes are more premium over the Classic 350 variants as Jawa 42 that is a range starting product priced at INR 1.55 lakhs while top specs Jawa variant costs higher at INR 1.64 lakhs ex-showroom.

In my opinion, both the bikes-the Royal Enfield Classic 350 and Jawa bikes share similar retro appealing. Though the Classic 350 is a modern classic while the Jawa is a pure retro offering with its bulkier components. So, it's pretty clear whoever wants to go with truly retro experience will go with the Jawa. In terms of power, Jawa bikes use slightly more power than the Classic 350. However, it does not make much difference during actual road experience.

Other than this, the thing which can be a base for selection out of these two is the price sticker. At INR 1.64 lakhs, Jawa is a costlier unit over the RE Classic 350. these are a few aspects which could help you make choice easier for these retro cruisers in the market.