Jeep India has teased the imminent compact SUV, the Compass on its official website, youtube channel and on social media handles. The company is going to organise a press conference on April 12, 2017, where the model will be unveiled officially. Though, the Jeep India has updated its website with the Compass listed as ‘Coming Soon’. However, the official launch of the SUV is plausible in August 2017.

In the global market, the Jeep Compass is already available to purchase as it had launched in September last year. Speculations suggest, India-spec Compass will be priced in the vicinity of INR 18-20 Lakh. The reason behind this aggressive price sticker could be manufacturing of the Compass at FCA’s plant in Ranjangaon, Maharashtra. Interestingly, it is the first product from the Jeep brand being locally assembled in the country. 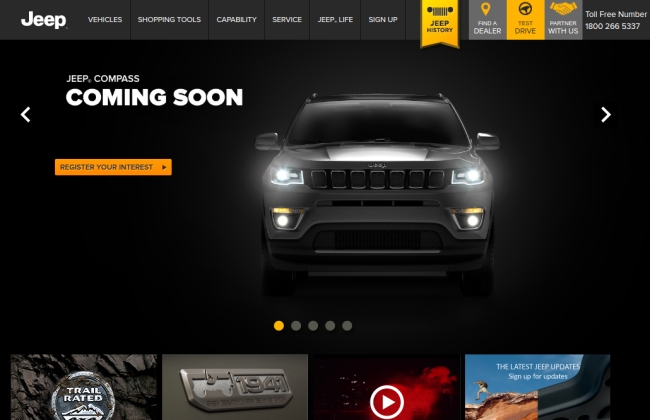 Talking about the features of the Compass which made it such appealing that no one can take their eyes off from it. On the exterior front, the SUV gets projector headlamps with DRLs along with trademarked seven-slot grille finished in Black. The Compass badging on the either side of the front doors, is like topping on cake. However, the interior of the car has not officially been disclosed yet. But the chances are India-bound Jeep Compass will be decorated with 3.5/7-inch LED driver information display, 8.0-inch touchscreen infotainment system and around 50+ safety and security features.

Mechanically, based on ‘small wide 4x4 architecture’, the upcoming Compass will be offered in both petrol and diesel engine options. It is likely to get a 1.4 litre petrol and a 2.0 litre diesel engine in association with a six speed manual transmission. A nine-speed automatic gearbox is also expected as an optional extra.

The India-bound Compass is the only manufactured right-hand-drive variant, out of the 100+ countries variant, where it will go on sale globally. Post launch, the SUV will lock its horns with the competitors in the segment such as Honda CR-V, Hyundai Tucson and the upcoming Volkswagen Tiguan. Reportedly, Volkswagen Tucson is also under pipeline and will make its entry to the Indian market soon.