Kawasaki Meguro 400 Could be Brands Next

Lately, Kawasaki filled to patent the name ‘Meguro’ in several US, European and Asian markets. As per the filing, the Japanese giant could use Meguro moniker ‘two-wheeled motor vehicles; motorcycles; scooters; mopeds; bicycles; structural parts for motorcycles’.

For many ‘Meguro’ would be an alien word, so here’s what’s Meguro? It was one of the most successful motorcycle brands in Japan which were renowned for developing motorcycles with single cylinder powertrains in 250-500cc engine displacement and a 650cc parallel twin unit as well in the late thirties and early sixties.

Later in 1960, post acquisition of Meguro, both started manufacturing motorcycles in different displacement categories like 125cc, 175cc, and 250cc. The Kawasaki W-series of motorcycle shares the powertrain developed from the Meguro K-series of parallel twin engines, the Kawasaki W800 is the best example for the engine in question. Some speculations suggest, the development of retro bike in sub-500cc from the Japanese brand under the Meguro moniker. Also, the segment is seeking a good hike in the Indian market with the models like Honda CB300R, Jawa, Royal Enfield Classic 350 and the Ducati Scrambler Sixty2 as well.

Read More: Kawasaki Seems to Roll Out Jawa300, RE 350 Rival in India in Coming Future 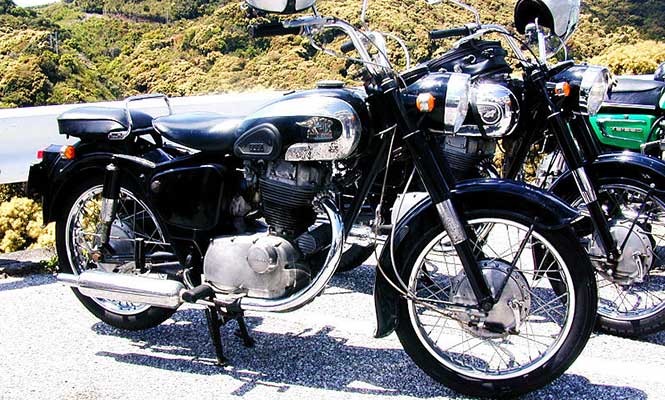 While the Kawasaki did not offer any model in the sub-500cc segment. Other than mentioned products, there are brands like Triumph and Harley Davidson which are looking to introduce a smaller capacity motorcycle. To develop such motorcycle, the Triumph is working with India’s third largest two-wheeler manufacturer, Bajaj Auto.

As in the retro bike segment, Kawasaki offers motorcycles like the W800, and the Z900RS based on brand’s Z900 naked streetfighter. So we can expect, the Meguro would be based on the Kawasaki Z400. The moniker Meguro has a racing heritage which suggests the Z400’s underpinnings on the expected retro bike like the chassis and powertrain.

If Kawasaki would use the Z400 chassis for the upcoming Meguro, it seems ready to use and whole development would be dedicated to styling resemble the Z900RS. It the expectation turns out as reality, we would be able to see the Kawasaki Meguro 400 as brand’s showstopper at the year’s EICMA.