Kawasaki W800 Launched in India, to Rival RE 650 Twins and Triumph Street Twin

A retro classic roadster from the Japanese bike maker, the Kawasaki W800 has been launched in India. The company introduced the model at the price tag of INR 7.99 Lakhs (ex-showroom) to take combat with the rivals in the segment including the Royal Enfield 650 Twins and the Triumph Street Twin. Here in India, the W800 has been launched again. Earlier the motorcycle was available in the country since 2016, however, its non-compliance with the global Euro 4 emission norms make the bike maker pull the plug off from its availability in the country.

In its new generation avatar, the W800 was initially showcased at the 2018 EICMA Motor Show with an improved powertrain to comply with the ongoing emission norms across the globe.

The W800 is so appealing with the retro classic styling and modern features. It gets round LED headlamp setup, semi-digital instrument cluster (twin-pod analogue meter along with a digital display), retro-styled LED tail lamp flanked by old-school turn indicators. In addition to this, decorated with lots of chrome elements and twin peashooter exhaust pipes, the Kawasaki motorcycle has a comfortable riding posture with incorporated slightly raised handlebar and a single-piece seat.

Beneath the fuel tank, the Kawasaki W800 is loaded with a 773cc, air-cooled, SOHC, fuel-injected, vertical-twin engine that is capable of developing 47.5 bhp of maximum power at 6,500 rpm and 62.9 Nm of peak torque at 4,800 rpm. The provided vertical twin motor from Kawasaki offers 360-degree firing order which as per the company is rated to supply a strong low and mid-range torque. Also, such configuration with vertical twin motor is pretty rare nowadays. 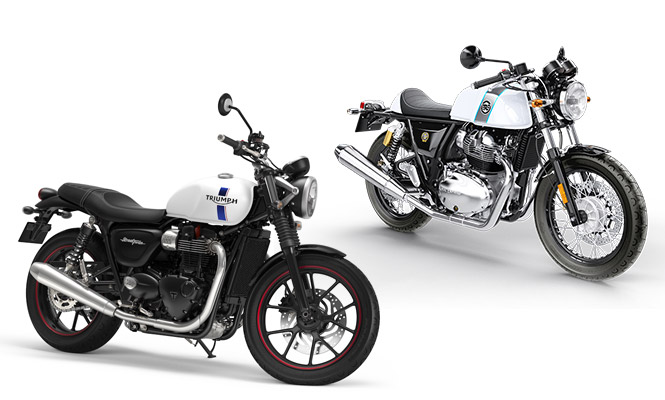 Read Also: Kawasaki Meguro 400 Could be Brands Next

On the suspension front, the Kawasaki W800 rides on a 41mm telescopic forks towards the front while the rear gets twin shock absorbers. The braking setup here is comprised of a 320mm disc brake upfront and a 270mm disc brake at the rear. The rider aids of dual-channel ABS is offered as standard for precise braking. The motorcycles run on an 18-inch wheels setup at both wheels.

Globally, the Kawasaki W800 Street STD is offered in two variants- the Street and the Cafe. However, the Indian market will be blessed with the only Street variant as of now. while the expectations suggest, we could witness the arrival of the Cafe W800 variant in the coming future.

The Cafe variant receives an addition bodywork in the form of the cowl around the headlamp while the riding posture on the bike remains aggressive with a slightly lower placed handlebar. The pricing of the motorcycle will also attract a premium over the street variant in India. The official launch of the Cafe W800 variant in India will give a clear view of pricing and provided specifications.