Highly Tweeted - The Maruti Suzuki Ertiga became the second model to get the automaker's newest 1.5-litre diesel engine. Pulled even more attention when announced that a new top-spec variant of the MPV is forthcoming for an India launch. Its not just engine in Ertiga which is going to spellbound Indians but many more new and enticing features are also going to come along and truly define its name - The Ertiga Sport.

Made its debut in Indonesia a few months before, we anticipate that it will carry the same name tag -The Ertiga Sport. With its prior launch in Indonesia we very well know about its specification, but what remains in disguise is whether the model will grab-able through the Nexa dealerships or the Arena chain which is the standard retailer of people’s beloved Ertiga.

Lets us discuss what Indonesian got in the new launch. First is its dynamic look - a bold
body kit with the seasoning of side skirts, a rear spoiler and faux skid plate. And not to forget the front and rear bumper enlargements. The more goodies to be mention include a unique alloy wheel design with a diamond-cut finish, the new LED daytime running lights fixed on the bumper, chrome ornamentations on the front bumper with an exquisite grille design. 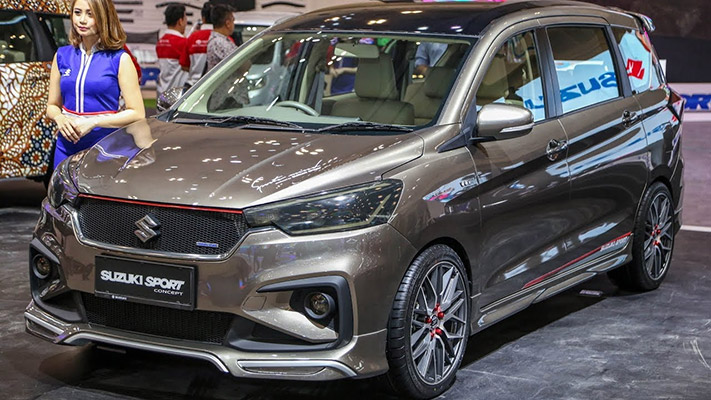 The premium look of the interior has been enhanced with faux woodgrain trim in an all black inside appearance.For Indians, it will be a 6 seater cabin which interprets second-row featuring captain's seats - a pioneer in any India launch Maruti Suzuki product. Other features of the new variant have been inherited by the current top-spec trim which of course includes the SmartPlay system and auto climate control.

Ertiga Sport is anticipated to be launched with the new 1.5-diesel engine as well as with the 1.5 petrol engine. The petrol engine is likely to arrive with the choice of a 4-speed torque converter (automatic). As far as price is concerned it is expected to be price labelled with Rs 40,000-60,000 more than the price of top-spec Z+ variants of the mainstream Ertiga variants.