Some refinements in features blended with many additions in safety specifications, to have arrived in the new and updated version of the well-known and most preferred budget car Maruti Alto 800. Very soon the launch of the same will take place and ample safety features will be witnessed in the same, as a result of strict applicability of safety standards from this month.

The new Alto 800 is compliant with the Automotive Industry Standard (AIS) 145 safety regulations with its equipped features like a driver-side airbag (dual airbags in higher variants), reverse parking sensors, speed-alert system, and driver and co-driver seat-belt reminder. The same features are fitted in updated Alto K10.

As far as other refinements are concerned, the new Alto 800 exterior gets a bit chic tweaks upfront, with a new bumper and grill, all other exterior features are inherited as it was. The new Alto 800 carries just the ‘Alto’ badge and completely abandon the “Alto 800” moniker.

The interior of the new hatchback looks quite frisky with the dual-tone black and beige finish on the dashboard, door pads & seats, and stylish steering wheel, imitated from Alto K10. The music system is as basic as that’s equipped with USB and AUX. However, the model does not feature the Alto K10’s instrument cluster and will persist with the one defined by the pre-update Alto 800. 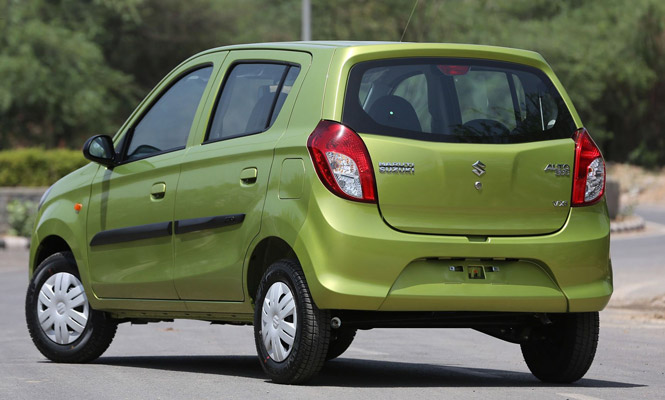 The new Suzuki Alto is expected to endure the same 796cc petrol engine which is fair enough for 48hp and is integrated to a 5-speed manual gearbox. No AMT gearbox will be accosted.

Alike,  Maurti Alto K10, the new Alto has been invented as a stop-gap arrangement as Maruti seems to launch an all-new model later this year because of the strict norms which are going to be applicable during that time.

The prices for this refined version has not been confirmed by the company yet, but it is expected that the new version will be price labelled with Rs 15,000-25,000 more over the current model. This is good news for all the Maruti lovers who are waiting for the new budget launch as this is the most economical car in India to accompany a standard airbag and ABS.

The renewed Alto is going to compete with the Datsun Redi Go and the Renault Kwid.