Maruti Suzuki is witnessing sluggishness due to the decline in sales. Maruti Suzuki export sales figure for March got down by 12.9 per cent at 10,463 units as compared to 12,016 units in the corresponding month last year.

When we compare the annual sales figures of the two F.Y.s, in FY 2018-19, Maruti sold 1,753,700 units of cars in the domestic market and exported 108,749 units. This attests the improvement in Domestic figures by 6.1% while the decline in exports by 13.7%. Although Cumulative figures of 1,862,449 units as against 1,779,574 units depicts improvement of 4.7%. But its rise is not fair enough to justify the double-digit growth. Here is the overall sales performance of the carmaker: 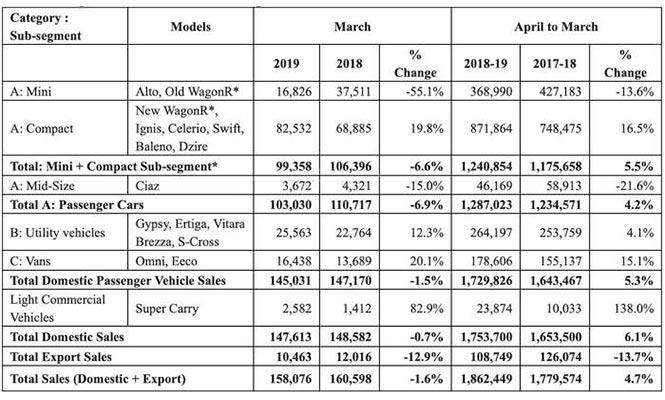 The sales figure of the mini segment has reduced drastically because of the exit of Maruti the new WagonR from the mini segment. Now the promotion of new WagonR to the compact segment led to the increment of a sale of the segment by 19.5% to 82,532 units from 68,885 unit.

New Wagon R has joined cars like Ignis, Celerio, Swift, Baleno, Dzire, and alto is left alone In the mini segment which witnessed a decline of 55% Sales from 37,511 units to 16,826 units. Utility vehicle segment including Maruti Suzuki Vitara Brezza, S-Cross and Ertiga displayed an increase of 12.3%, despite the discontinuation of Gypsy. The mid sedan Maruti Suzuki Ciaz witnessed the increased sale of 3,672 units as compared to 4,321 units in the same month a year ago.

At present, Maruti Suzuki‘s recent launch the Ciaz is the defender on the fuel efficiency with its powerful 1.5-litre diesel engine which delivers 26.8 kmpl. Prices of the new Maruti Suzuki Ciaz 1.5 Diesel starts at Rs 9.97 lakh (ex-showroom, Delhi) and is procurable in three variants - Delta, Zeta, and Alpha.
For the upcoming launch, Maruti has the new generation Alto, scheduled for the official launch in October 2019. It is going to replace the current Alto 800 and the Alto K10.