The MV Agusta F4 Claudio is a Limited Edition Model that pays tribute to Claudio Castiglioni. The person behind MV Agusta success since 1990. Other than the MV Agusta, this person has been associated with the Italian brands like the Ducati, Cagiva and Husqvarna over the decades in a bid of creating antiques.

Mr Claudio Castiglioni’s journey with MV Agusta started with reviving of the F4 750 superbike, designed by Massimo Tamburini. Later the superbike used as a base model for the development of new high-end machines, comprising the Brutale and the F3. Also, the current F4 is on the verge of getting replaced via an improved iteration for coming more stringent emission regulations in April 2019. While in question, special edition model is Claudio Castiglioni’s last project in the row.

The MV Agusta F4 Claudio has been revealed in front of the global audience. The homage model that is being considered as a whole limited edition model is packed with all the high-end components and equipment. It carries forward the technicalities of the base model MV Agusta F4 RC along with features borrowed from the brand’s model from the World Superbike Championship. 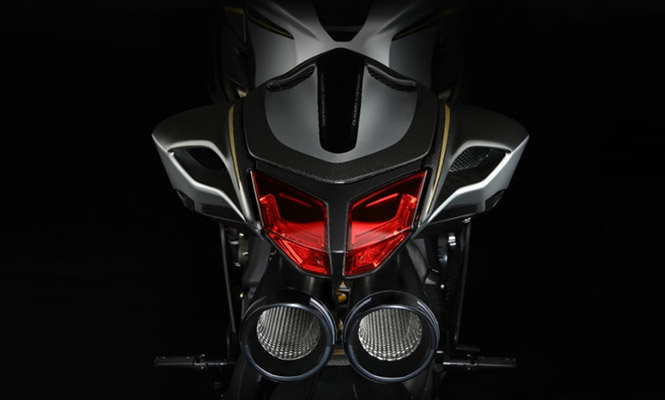 The bolted powertrain observed a host of enhancements in the form of titanium connecting rods and specially crafted and balanced crankshaft unit. While the combustion chamber now boasts radially-set valves. Now the mechanicals is in composition to convey race focused performance. The engine in question is claimed to churn the maximum power of 212 bhp at 13,450 rpm along with a peak torque of 115 Nm at 9,300 rpm. With the standard road-legal setup, the motorcycle still generates 205 bhp.

The exhaust setup on the F4 Claudio is a dual exit titanium SC-Project racing exhaust unit with customization aids. There is a well-nourished electronics package with four maps on offer, of which one can be selected or take into consideration via the racing push-buttons. The Brembo sourced Stilema 4-piston Monobloc radial calipers with twin 320 mm front discs handles braking duties. While the top-spec shock absorbers from Ohlins endows optimized performance on both road and track.

With this Limited Edition model, the automaker’s major concern was of keeping bike’s weight low. There is a lot of carbon fibre work across the bodywork including fairing and lightweight carbon wheels. While, instead of conventional bolts and screws, Titanium fittings are used. Also, the CNC-machined aluminium alloys are also spread across the bike in components such as the triple clamp, height-adjustable footpegs, brake and clutch levers, and brake fluid reservoir plugs and filler cap.

The MV Agusta will put only a limited count of just 200 bikes on sale. The pricing is not revealed yet. It is expected to divulge at its probable debut at the EICMA show in Milan next month.